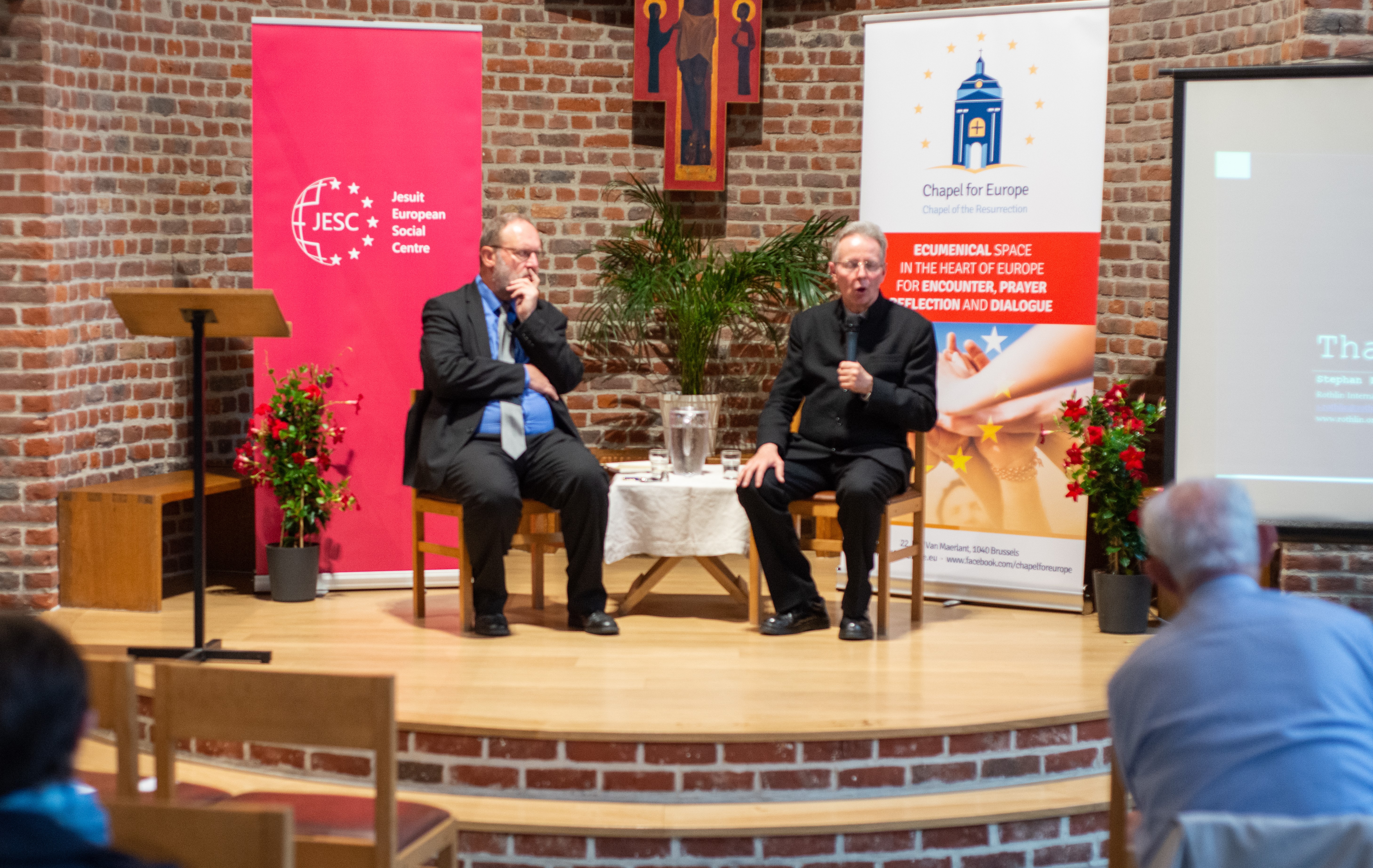 How likely is a visit of Pope Francis to the land of China? Stephan Rothlin SJ discussed this current topic when he was hosted by the Jesuit European Social Center (JESC) and the Chapel for Europe on Tuesday June 11th to talk about the provisional agreement signed between the People’s Republic of China and Pope Francis. Signed on the 22nd September 2018, the document deals with issues such as the nomination of bishops, the restructuring of the diocese, the power over the church, the formal recognition of the Pope, and the elimination of underground bishops and priests. These are the first signs of a rapprochement process that has fostered a great deal of controversy.

China’s economic growth relies heavily on globalization, which has boosted the international presence of China. This phenomenon creates opportunities and increases efficiency, but also generates issues such as wider inequality gaps, erosion of local cultures and traditions, or the development of a financialization system that seeks short-term, economic benefits rather than prioritizing the search for the common good.

Fr. Rothlin is part of those who call for Chinese business-owners to change this via the recognition of the dignity of workers, an increase in the awareness of problems regarding working conditions, and the overall use of resources in a wise, just, and sustainable manner. Otherwise, business leaders risk living a divided life, which is fragmented morally and spiritually due to an internal conflict between the desire to respect human dignity and to maximize economic profit. By combining both desires and educating business leaders about these principles, China can move towards sustainable wealth. The attitude of China regarding caring for the common home may well be decisive in the fight against climate change. Although Laudato Si’ has been published in China, its popularity has so far been limited, but if Pope Francis were to acquire an increased presence within China, the influence of the Encyclical letter would increase.

The provisional Sino-Vatican agreement gives hope that Western Catholic social principles can go along with high-speed Chinese growth and local values. Indeed, Fr. Rothlin explained that Catholic social leaders and Confucian morals share a number of points of convergence, such as the centrality of the cultivation of virtue, or rújiā. There are key concepts that resonate with both Catholic Social Teaching and Confucian values, such as the priority of the common good over short-term economic profit, the sustainable use of resources in a way that human needs are fulfilled, and the correct behaviour of business leaders regarding the use of the influence they acquire through their position.

Teaching young Chinese leaders about Catholic Social Teaching and the importance of virtue in business can influence larger issues, such as anti-corruption regulations. The formation of businesspeople in religious contexts shows the promise of all the good they can do. In that sense, efforts to improve the collaboration between the Vatican and China should be maintained.

Stephan Rothlin thus argues that we now have a unique chance to enter into dialogue with the Chinese, to learn how to trust them, and to cement a good sino-western relationship. Cultural backgrounds strongly influence the ways in which each individual defines and develops trust, but both Western and Chinese societies place high importance on building trust as the basis for cooperation in the economic and political spheres.

This could also lead to strengthened ties with both sides of the divided Christian community in China: the official Christian Church is monitored by the Chinese Communist Party, whereas the members of the underground Christian Church uphold the values of the Vatican. In addition, it can facilitate the establishment of stronger ties between the Catholic Church and other religious minorities in China, such as the Muslim or Buddhist communities. It even creates hope regarding possible agreements between the Chinese Government and other religious leaders in the future. Moreover, this rapprochement legitimizes China on a business perspective and could bring it closer to European leaders, if only because the more surreptitious operations of the Chinese Government would be even further disregarded than they are now.

Pope Francis knows what is at stake on a political scale just as much as ethically or from an economic view, but for him the provisional agreement is to be considered as a spiritual achievement. He believes we have to move beyond trade tensions and political ties and we should focus on the potential beneficial outcomes, possibly even a future visit of the Pope to China.

By Blanca Marabini and Emilie Noël