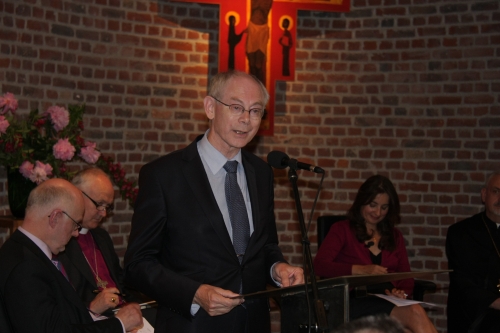 In a key note speech on “Bringing hope and solidarity to European integration” delivered yesterday evening at the Chapel of the Resurrection, also known as the Chapel for Europe, Herman Van Rompuy set out his vision for a united Europe based on values and the Christian conviction that caring for others means finding yourself. In the current crisis the peoples of Europe would go beyond their own state interest because they care not only for themselves but also for others.

In quoting Martin Buber, the Viennese-born Jewish philosopher the President of the European Council defined the European Union as a community formed by relationships between states, peoples and persons : “In the beginning is relationship. All true life is encounter. It is encounter which creates, with the presence of the other, the reality of time as present. I become myself in contact with “You”, I become “I” by saying “You”. In the light of this philosophy of relationship, this philosophy of encounter, I wish to see Europe’s destiny unfold.”

Van Rompuy, who is in charge of preparing and chairing the European Council bringing together on regular basis all Heads of States and Governments of the European Union, was addressing 200 invited guests working in and around the European institutions. In his speech he encouraged the audience “to embark on a journey in search of this “extra something” which is within us and just waiting to be revealed. We must seek a purpose in life in general and in our own lives in particular. Such a purpose will never be found in the Ego. It resides in the Other and/or in our relations with the others. By embarking on such a search, each in our own individual way, we can bring to the community of Europe this added dimension which will eventually turn it into a Union in the true sense of the word.”

President Van Rompuy was echoed by His Eminence Metropolitan Emmanuel of France, Director of the Liaison Office of the Orthodox Church to the European Union, Most Rev Noel Treanor, Bishop of Down and Connor (Ireland), Rt Rev Nick Baines, Bishop of Bradford (England), Ms Katrin Hatzinger, Head of the Brussels Office of the Protestant Church in Germany and Mr Staffan Nilsson, President of the European Economic and Social Committee.

The participants in the round table agreed that Europe needs renewed conviction and steadfast solidarity to secure peace and prosperity for its citizens. As Europe enters a new phase of integration marked by economic instability, loss of hope and question marks put to European solidarity, Churches would have to do more to communicate the positive impact of the European Union and explain that European integration is very much inspired by Christian values.

Full speach, video and pictures at the Chapelle of the Resurrection.