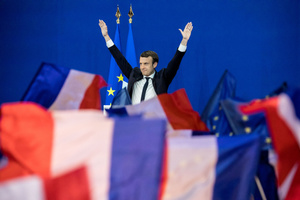 The European anthem “Ode to Joy” resounded as newly-elected President Emmanuel Macron walked into the Louvre courtyard to address his supporters. In Brussels, this election result was greeted with huge relief.

The French presidential elections culminating on 7 May were seen as decisive – not only for France but also for the fate of the European Union. The far-right Front National candidate Marine Le Pen had wanted France to leave the EU. Brussels finally let out a huge sigh of relief, with European Commission President Jean-Claude Juncker declaring himself “happy that the French have chosen a European future.” European Parliament President Antonio Tajani welcomed Emmanuel Macron’s victory, because it meant the French had “spoken out against populism, against France’s exit from the European Union and in favour of a better Europe.” European Council President Donald Tusk wished the newly-elected French President every success and emphasised: “France is essential for Europe, just as Europe is essential for France.”

There is another way of viewing the French elections, however. More than 10 million voters who had voted for Marine Le Pen were effectively voting against the EU. Add to this number the 4 million voters who had returned a blank or spoiled ballot paper. In the first round the eight anti-EU candidates had obtained 49.6% of the vote. Neither this level of Euroscepticism nor the populism and nationalism associated with it have disappeared with the election of Emmanuel Macron.

Enormous significance for the election result was attached to the vote from Catholics, who make up 61% of the population. According to a Le Monde survey, 44% of Catholics had voted in the first round for the conservative candidate Francois Fillon. France’s Catholic bishops, in contrast to the position they had taken in 2002 on the runoff between Jean-Marie Le Pen and Jacques Chirac, did not want to side with any particular candidate this time. However, on 23 April the French Bishops’ Conference did publish a set of criteria for the election highlighting the importance of welcoming migrants and supporting the European project. Referring to Pope Francis’ Encyclical Laudato sí, the bishops reminded voters that they also had a responsibility towards future generations on the ecological front – a topic that barely surfaced during the election campaign.

After the elections, a new survey made by the newspaper La Croix revealed that 71% of regularly practising Catholics had voted for Emmanuel Macron, and he had received even more support from the Muslim electorate, 92% of whom had voted for him. Nevertheless, the survey also revealed significant differences in the Catholic electorate: 46% of occasionally practising Catholics had voted Front National while only 29% of those practising regularly had done so. Election turnout this time, at 80% for Catholics and 76% for Protestants, was well above the usual average of 65%.

Emmanuel Macron has shown that elections can be won with a decidedly pro-European agenda. His recommendations for the medium term include a eurozone finance minister, a eurozone budget, minimum social standards in the EU and joint euro area bonds, for which all eurozone countries are jointly liable. But these reform proposals were quickly met with criticism, particularly from Berlin.

In her article in this edition of Europeinfos, Monique Baujard touches on the principle, very dear to the heart of Pope Francis, that the whole is not only greater than the part but is also greater than the simple total of all its parts. When this maxim is applied to Europe, it means that Europe is far greater than the sum of the countries and peoples of which it is composed. Rediscovering Europe’s “added value” provides both a duty and an opportunity. President Emmanuel Macron demonstrated this symbolically by choosing the European anthem over the Marseillaise at his victory celebration.

Translated from the original text in German.

Originally published in the June issue #205 of Europeinfos.