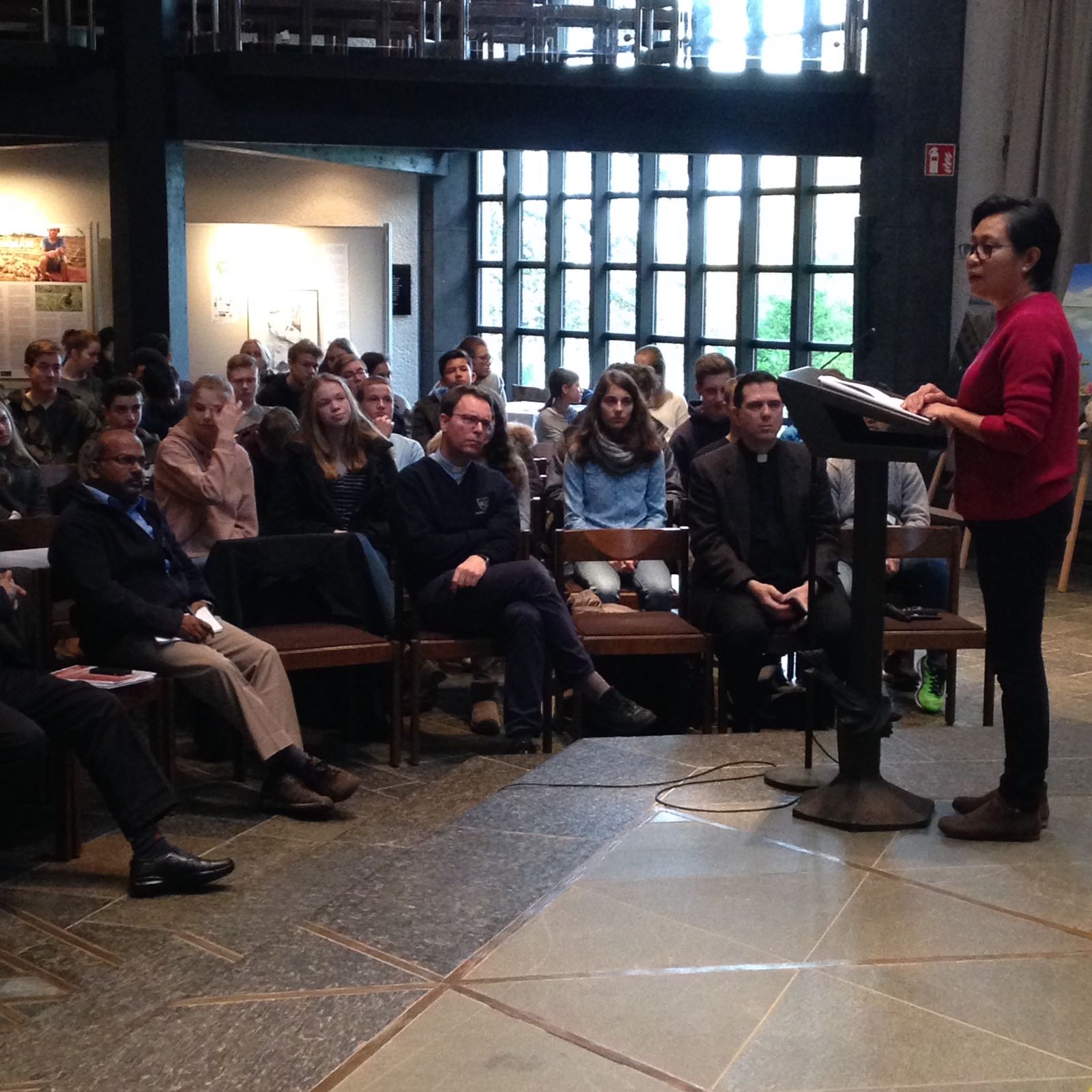 Between 6 to 17 November, over 30 Jesuits and co-workers belonging to the Ecojesuit network participated in events during the UN COP23 climate change conference held in the German city of Bonn. Among them were two members of the JESC team, Peter Rožič SJ and Henry Longbottom SJ.

COP23 – What happened on the international stage

Conference of Parties (“COP”) summits take place annually.  This year, nearly 200 countries met for two weeks of talks on how to implement the 2015 Paris climate agreement which aims to limit global temperature increases and help countries to deal with the impact of climate change.  Owing to Fiji’s presidency of the summit, there was a special focus on the plight of small island developing states.  If carbon reductions targets are not met, it is estimated that by 2050, up to 1.7 million people in the Pacific Islands could be displaced due to climate change.

It is widely believed that the COP23 discussions have led to the development of a ‘rulebook’ for how the Paris agreement will work when it comes into force in 2020.  There are still however many decisions to be made at the next round of talks, scheduled to take place in Poland in December 2018.  A particular unresolved stumbling block is the need for increased climate finance, namely a roadmap for achieving a $100bn fund by 2020.

Catholic groups played a prominent role at the various COP23 “side events” – meetings and conferences for state delegates, NGO workers and members of the public.  One such event was the launch a new CIDSE paper, Climate Action for the Common Good on 15 November.  Sitting on a panel with Pedro Walpole SJ (Coordinator for Reconciliation with Creation of the Jesuit Conference Asia Pacific) Fr. Bruno Marie Duffé, Secretary for the Vatican’s Dicastery for Promoting Integral Human Development said: “We should not underestimate the importance of the moment we are in now.  We are in the middle of the river, and we cannot go back.  We have to be together, and we have to be strong, even if one state decides to go back.  We have had the Paris agreement and now we have to move from the ethical intentions to making the political happen, and to do that we will need a new model of development that is rooted in dialogue and mutual solidarity, and that recognises the talents that each party has to contribute.”

Using the Jesuit Aloisiuskolleg Bonn-Godesberg as its base camp, the Ecojesuit team comprised Jesuits and friends from around the world, from Micronesia to Central Africa, from India to Latin America.  In addition to internal sharing and strategy sessions, Ecojesuit members participated in the various COP23 talks and activities.  Blogs written by different members of the Ecojesuit team about their experiences can be found on the COP23 Ecojesuit website.

Ecojesuit also hosted its own day-long event for the public on 13 November.  The first half of the day was devoted to a dialogue conference entitled “Laudato Si’ – Environment is Relationship” exploring food security and natural resources issues.  The dialogue was moderated by Andreas Carlgren (Newman Institute, Uppsala) and Cecilia Calvo (Environmental Justice Adviser, Jesuit Conference of Canada and US).  Speakers included William Kostka of the Micronesian who conveyed concerns regarding climate mitigation from the perspective of the pacific islands, François Delvaux, Food Sustainability Advocacy Officer at CIDSE who focused on agroecology and Felix Löwenstein, a large-scale organic farmer.

The ensuing discussions and questions centred on how Laudato Si’ be used as an educational tool to transform attitudes towards resources.

In the afternoon, Ecojesuit held a “Laudato Si Fair” at which numerous Ecojesuit members showcased their activities, ranging from the Flights for Forests and Carbon Challenge initiative, to the Justice in Mining Network advocacy group, and the Loyola University Chicago Institute of Environmental Sustainability.

Thanks to the generous involvement of the staff at Aloisiuskolleg, especially its headmaster Martin Löwenstein SJ, English teacher Dr. Dorothee Rölli, and physics teacher Christian Modemann SJ, many of the school’s 700 students participated in the Ecojesuit events.