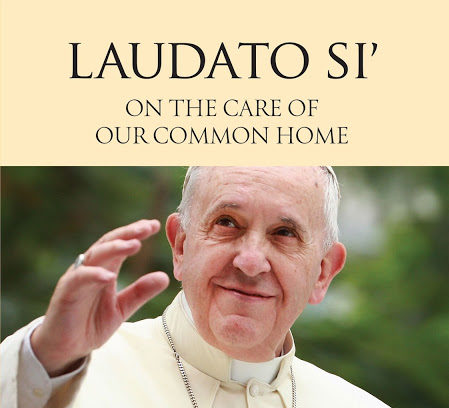 Laudato Si’ is an Encyclical Letter of Pope Francis that lays down an interesting perspective on ecological and societal factors as causes of global changes, such as migration. Even though population movements are common phenomena, observed countless times in the history of humanity, they have an impact on migrants themselves and on local populations. Many times massive, uncontrolled, migrations are caused not by a mere hope for a better life elsewhere, but by a number of negative factors, such as fear for individual safety or general inability of peaceful continuity of habitation in a specific place due to war, economic crisis, lack of access to food or water.

To address these issues, Laudato Si’ reinforces the traditional Catholic call for peace (as observed e.g. in the Encyclical Letter Pacem in Terris) but also begs all humanity for greater reflection and engagement in the well-being of the planet. It provides a complex and comprehensive outlook on the deterioration of the natural environment and teaches that the responsibility for the preservation of ecological diversity rests on our shoulders. It encourages all to engage and to strive towards healthier and more sustainable economic development which does not increase social inequalities, highlighting their negative impact on the poor.

These global changes have a tremendous effect on the stability of our societies and on international relations. The observable tendency of theories of international relations to stress the importance of rapid economic development is challenged by Laudato Si’, which stresses sustainable eco-friendly development as better in the mid-term. Interestingly, this concern applies also to more ‘conflict-driven’ schools (e.g. neo-realism), as they cannot neglect the importance of environment and risks posed by its deterioration. The concept of the Earth as common good criticizes the view of international relations as zero-sum game, especially in the light of the fact that wars, migrations and social unrests can be caused by poverty, famine, lack of access to water, and other factors resulting from unsustainable economic development or lack of sufficient care of environment.

Many of these calamities concern modern science, whose representatives from countless disciplines attempt to draw governmental attention to environmental matters. Modern science demonstrates great care for green technologies development and invents more and more environment-friendly alternatives. In the understanding of Laudato Si’, (…) science and religion, with their distinctive approaches to understanding reality, can enter into an intense dialogue fruitful for both. This well-balanced view calls for dialogue and joint efforts of both men of religion and of science to cooperate for the benefit of all. The concerted practice undoubtedly would have a greater impact on preserving natural harmony of the Earth than split and chaotic undertakings. With this respect, it is crucial to take all aspects and societal dimensions into consideration, so the nature of changes could be tackled in the most well-round and holistic manner. It is really important to see that this not merely a challenge of ecology as such but revolves around other important variables. For example, it is hard to imagine, that certain developing, coal-reliant states, such as Poland, could immediately drop all its coal dependence for the greater good without suffering an extensive crisis and paying high societal price coming from e.g. workers’ unions.

While this is certainly true that economic development, since at least industrial revolutions, has harmed our environment more than anything else, the Encyclical Letter ought to call modern scientists and scholars to have their efforts doubled for the benefit of all. The politicians should not only think of ecology, but also of the most vulnerable members of society, potential political instabilities, a timeline of changes, etc. For this reason, both the Church and politicians need academia and scientists. They could be an important ally in the field of the interconnection of humans and ecology, preservation of biodiversity in its richness and peaceful, sustainable, development.

As a trivia, it must be noted here that classic concept of a division between ‘rich North’ vs ‘poor South’ continues to exist, but the North also remains vulnerable to global changes either. Having that in mind, Laudato Si’ offers a well-balanced and insightful third way trying to reach a compromise between the rich and the poor and to contribute to a more peaceful and more harmonious future.