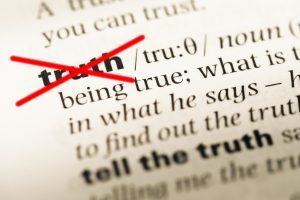 The spread of fake news has made truth and lies an urgent topic of political and social debate. The Association for the German Language chose the new idiom “postfaktisch” (post-truth) as its Word of the Year for 2016. The publisher of the Oxford Dictionary also chose the English term “post-truth” as its International Word of the Year for 2016. This is symptomatic of the finding that objective facts in political and social discussions are becoming increasingly replaced by emotions and arbitrary claims. In this edition of Europe Infos, Mari Sol Pérez Guevara describes the significant role of social networks in the spread of fake news. But what is truth?

In the classic philosophical sense, truth is the correspondence of a statement with reality. The opposite of truth is a lie – a deliberate falsehood. Lies were openly spread during the campaigns for both the UK “Brexit” referendum and the US presidential election. In the former, claims were plastered on the sides of London buses that the UK pays £350 million a week to the EU, yet just one day after the referendum, Brexit proponent Nigel Farage admitted that this claim was untrue. Again, while on the campaign trail, Donald Trump had insisted that Barack Obama was the founder of the terrorist organisation “Islamic State”.

The truth has never been given an easy ride in politics. There are politicians who, while refusing to lie, see no obligation to tell the whole truth all the time. This is especially true regarding the honouring of existing agreements. One week before the election of the EU Parliament’s new president, Manfred Weber, leader of the European People’s Party, disclosed an agreement – hitherto kept secret – in which the social democrats had pledged their support for a conservative successor halfway through the legislative term. Weber warned them not to break their word. But even the reaching of this agreement and the fact that it had been kept secret were enough to pose problems, and only served to confirm and bolster the public’s growing mistrust of politicians.

It is said that in times of war, the first victim is truth. In his essay, “Perpetual Peace”, Immanuel Kant demanded that “some confidence in the way of thinking of the enemy must remain even in the midst of war”, since otherwise it is impossible to conclude any peace. This can be applied to politics in the sense that some confidence in the truthfulness even of a political opponent must be maintained, otherwise the most important, most valuable capital in politics would be lost: trust.

But it is not only a matter of trust between politicians one to the other, but of the trust of citizens in the political process itself. The French bishops got to the heart of this most convincingly in their essay, Rediscovering the meaning of politics in a changing world, which attracted a lot of attention within the Church and beyond: “The crisis in politics is first and foremost a crisis of confidence in those who are responsible for looking after the common good and general interests.” This also touches the foundations of the European Union, which Jean Monnet described in 1950 as: “We are here to undertake a common task – not to negotiate for our own national advantage, but to seek it to the advantage of all.” A prerequisite for this is honesty and truthfulness. Or, put more simply, to follow the eight of the Ten Commandments: You shall not tell lies.

Translated from the original text in German