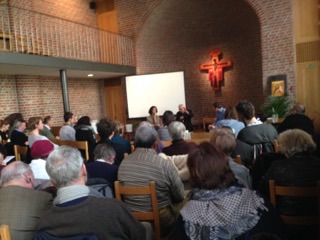 In response to the European Union’s adoption of legislation on responsible mineral sourcing in March 2017 Africa Europe Faith & Justice Network, JESC, and the Justice and Peace Commission organised a round table and photo exhibition, hosted at the Chapel of the Resurrection. The events explored issues relating to conflict minerals, respect for human rights and European consumer behaviour. The following is a translation of a summary of the events by JESC advocacy officer Emmanuelle Devuyst, originally written in French.

The exhibition of photographs taken by Ivan Benitez, was put together by the organisation ALBOAN, as part of its campaign for conflict-free technology.  The images, taken in June 2014 in Rubaya, 70 kilometers from Goma in the eastern part of the Democratic Republic of Congo, aim to illustrate the reality of artisanal mining. They give an insight into the conditions of the populations around the mining sites. The majority of these people have been displaced following violence in the region and have few alternatives to making a living. The photo exhibition aims to raise awareness of the impact of European consumption practices and Europe’s share of responsibility in creating unacceptable situations.

On 7 March 2017 at the Chapel of the Resurrection, about fifty people came to listen to Marie Arena, a Socialist MEP who is in charge of conflict minerals in the parliamentary committee on international trade, and Monsignor Ramazzini, a Guatemalan bishop who has a background in defending the rights of local communities. Stakeholders and members of the public were invited to discuss how respect for human rights can be incorporated into European consumption patterns, and in particular to consider the following questions:

1) How can we explain the cooling of the European approach to corporate governance at a time when self-regulation and codes of conduct have been shown to have reached their limits in terms of effectiveness?

2) What measures should be taken by public authorities to ensure that production and consumption patterns for a growing population are sustainable and respectful of human and social rights?

3) What is the role for civil society and European citizens on these political positions?

Monsignor Ramazzini stressed the environmental vulnerability of Guatemala, which is not taken into account in the allocation of permits to prospect and exploit the subsoil. He wants the European Union to prioritize human rights in its trade agreements and to place greater emphasis on the well-being of countries and not just look after its own interests when it comes to development assistance programs.

Marie Arena made a brief assessment of European legislation (the “Supply of Conflict Minerals Regulations”) highlighting the fact that the text is binding and should be considered as a first step. She regretted however that finished products were not covered by the legislation and that thresholds had been imposed. She also stressed the importance of (a) reviewing the European implementation of these new standards and (b) there being strong accompanying measures for member states on how to implement the regulation. These accompanying measures are being discussed and monitored closely by civil society to ensure that they are an effective tool to support affected populations.

Future negotiations within the United Nations on the adoption of a binding treaty on business and human rights will highlight the European Union’s position on the subject of conflict minerals.