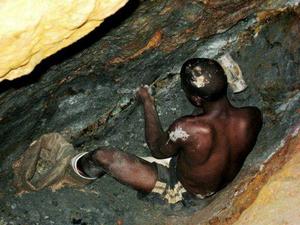 After three years of negotiations, the European Union has finally got round to legislating on conflict minerals.  Definitely a step forward, but not going far enough, writes JESC Advocacy Adviser Emmanuelle Devuyst

On 22 November 2016, the Trilogue negotiations between the European Commission, Parliament and Council of the EU Member States agreed upon a Regulation, albeit not a very ambitious one in scope, governing Europe’s trade in minerals. This legislation is designed to prevent the financing of conflicts and human rights violations through minerals imported into the European Union.

The term “conflict minerals” refers to the financing of conflicts through the illegal exploitation of natural resources which are subsequently freely traded, either as raw or refined commodities, and incorporated into finished products. Any type of mineral has the potential to fall into the “conflict” category, but the Regulation only deals with tin, tungsten, tantalum and gold. The European Union is a major importer of these four minerals, either as raw materials or after incorporation into commonly-found consumer products such as computers, mobile telephones and electric motors.

From entirely voluntary to partially binding

In 2014 the Commission had initially proposed a purely voluntary procurement mechanism for Europe’s foundries and refineries, using a self-certification system for its supply chains.

In May 2015 the Parliament went even further– especially in response to pressure from civil society – and adopted for these four minerals a binding mechanism of “duty of diligence” throughout the supply chain.

The new Regulation will finally force major companies in the European Union to submit their supply chains to due diligence when importing these four minerals and their metals in quantities above specified annual quotas from anywhere in the world.

Responsibility agreed, but not for everybody

Although we can be thankful that, for the first time, certain European companies will be obliged to adopt a responsible attitude towards their mineral supply chains, we can only regret that exemptions are made for finished products and that the Regulation includes import thresholds below which companies escape any legal obligation. Companies falling outside the scope of the Regulation are entrusted with the task of self-regulation, but a large majority of them do not undertake this, or do so in a minimal manner with alack of good will.

What is more, the Commission has agreed to accredit private industrial schemes, to which some companies delegate their obligations for due diligence, meaning they will have the advantage of reduced controls. This outsourcing of responsibility to privately paid contractors responsible for managing the risks of conflict should not be used to discharge companies from their own responsibility for their supply chain.

Finally, it is regrettable that the European lawmakers have postponed the entry into force of the Regulation until 2021. This delay is disappointing given that the responsibilities the companies are supposed to be assuming have been public knowledge for a long time now.

While it seems obvious that this Regulation alone cannot suffice to promote peace and development in the regions affected by the “resource curse”, it is to be regretted that the European Union has not assumed more responsibility for the minerals trade and does not fully recognise the human rights of the affected communities living inside conflict zones.

Even harder to understand is why the EU is mobilising in parallel some major financial and diplomatic resources to promote peace and prosperity in these conflict regions, while at the same time tolerating importation into its own market, products containing minerals that finance the fighting.

We can only hope that the Regulation’s amendment clause will allow for control and adjustment, if necessary, to the degree of voluntary implementation by the companies which, until now, are under no obligation to apply due diligence to their supply chains.

The EU as trading partner and even more

Civil society nevertheless welcomes the EU’s integrated approach which connects this Regulation with several other measures for diplomacy and development cooperation in order to provide support and assistance particularly to the communities affected by this link between mineral resources and violations of human rights. Indeed, international standards are designed to encourage and facilitate responsible and transparent trade with the regions at risk, not to dissuade companies from trading with them.