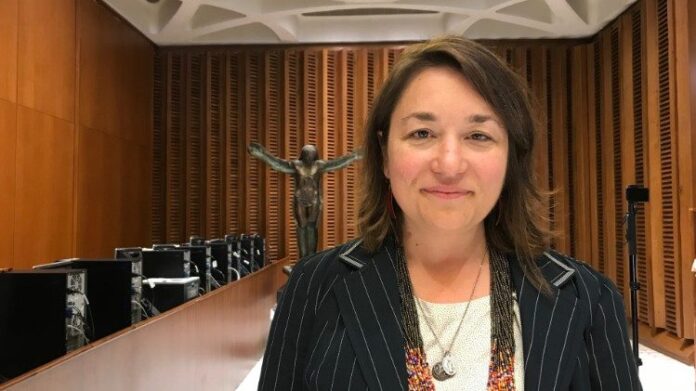 Current Director of CIDSE, Josianne Gauthier shares with us a lifetime dedicated to fighting for human rights in which ecological thinking has now become central.

Qs: Who is Josianne Gauthier, tell us a bit about your background.

I am French Canadian, trained as a human rights lawyer, am married with three children and have been active in social justice and human rights work most of my life. I have travelled both in youth with my family and later as a professional, living in different continents, exposed to many languages and cultures, and always guided by my family’s strong Catholic faith and concern for the welfare of others.

Qs: How did you first become in touch with ecological thinking? Has this affected your approach to social advocacy?

Like many people of my background and generation, I came to ecological justice indirectly, first through human rights, social justice and international development and cooperation. Then, the natural connection between international policy and our individual and collective behaviour and consumption became clear to me. Laudato Si was a very important document in pulling together reflections and thoughts which had been occupying my mind for a few years already. We knew of the ecological crisis, but felt ill-prepared and ill-equipped. There was still too strong a divide between the ecologists and the human rights activists, between the social justice work and the environmental protection work. Laudato Si provoked us and helped us to understand that this all needed to be done together.

Qs: In Canada, as in many other places, ecology and indigenous people’s rights –colonisation- are deeply interrelated matters. The politics behind the commodification and the exploitation of nature is, in this sense, very visible. Has this experience helped you develop a more holistic understanding of green affairs?

Absolutely. In fact, my own personal faith and action reflection and path were being forged through the Truth and Reconciliation process in Canada with Indigenous communities. It was my awakening to the colonial reality and my role in it was happening exactly as I was awakening to our need for an ecological conversion. The way we treated Indigenous communities as objects to be exploited, uprooted, extracted, and commodified was exactly the way we looked at resources in our own country. In Canada, while there is a deep appreciation for Nature (seen as our wealth in many ways) there is a strange lack of awareness about the urgency or fragility of it all, because of the abundance. When listening to Elders from the Indigenous communities, you understand that land and people are one and connected. By hurting the land, you hurt the people. And later, you understand that it is not just others, but we are also among those people being hurt.

Qs: Do you believe this is an important –political- perspective that we Europeans lack? With what effects?

What has surprised me about Europe is the total disconnect with the colonial story. It is seen (as it used to be seen in America) as something in the past, for which we are not responsible, which should not affect our present. This is completely untrue. All current contexts of trade, of international relations, even international aid, and much (most) of Europe’s wealth and power are all inherited and built on the foundations of colonialism and exploitation. It is critical that Europe realises this, because it changes the entire relationship with the other continents, the responsibility, the role, the understanding of the unfair advantage and privilege. It changes the future.

Qs: Continuing with your home-country. Last year’s “Trash War” between Canada and the Philippines exposed the inequalities behind the globalisation of waste management. How did the Canadian public react to this incident? And what are your thoughts about this reality?

I think it is the perfect example of externalising. We have done it for so long, that we don’t even realise we are doing it. It started with colonialism and slavery, continued with unfair work conditions in far away factories and fields and continued into waste management. The so-called prosperity and good living conditions (even ecological) are unfairly achieved, and come at the cost of others’ suffering. I think Canadians, to their credit, were rightly ashamed of what they learned but the challenge – when you are used to a certain way of life – is accepting to make any real changes or sacrifices.

“Nobody wants to consume less, stop consuming and “lose” what they understand to be their rights (although these are privileges and luxuries). There is a false narrative that we somehow “deserve” our good life because we achieved it through discipline and hard work – hiding the lie of the unfair advantage.”

Many people in industrialised and wealthy countries either want to “export” their problems and waste outside the country or into the future – by hoping that technology will solve our ecological crisis instead of making the courageous decisions today to reverse our consumption habits.

Qs:  The European Council is struggling to accommodate climate ambition into European NDCs, and, last month, the UN certified that, during this last decade, none of the Aichi Biodiversity targets had been met. In your view, what is preventing us from engineering a green future?

The number one reason is stated above. We are mostly unwilling to give anything up of the exaggerated luxuries we have grown accustomed to. We are unwilling to consider new economic models – to think of sufficiency. We only want to minimize damage, bur refuse to reconsider how we live in a radical way. And our way of living is terribly dangerous to the planet and life on it. We have not even understood (perhaps a little with the Pandemic) that even our own lives are at stake.

Qs: Turning the focus into activism. As the Secretary General of CIDSE you have a prime overview of faith-based action on ecological and social matters. What works well, and what needs improvement?

What I have learned so far is that the moral and spiritual argument and foundation to the work are important, because they inspire and bring the different elements of reflection together. It helps to have strong belief that what you are promoting or asking for is for the common good, for dignity, for solidarity, and for justice. These foundations in CST are a strong basis for developing the political argument.

“The connection between people and planet, human crisis and ecological crisis as framed in Laudato Si are also very strong pillars and something that is often sought out to refresh the conversation and ensure coherence and consistency between policies (often developed separately: trade, human rights, climate for example).”

Another strength is to create space for the voices of groups that are often excluded from high-level discussions among the powerful. Faith actors bring these stories to the front, and help create space for other voices to be heard – others sources of knowledge and wisdom, away from the dominant discourse of those already in power in the world. This tells the story of the impact of decisions and behaviour in the wealthy and powerful nations on the communities around the world.

What is more challenging is creating and safeguarding that space. As faith actors usually fall into the category of civil society, they must take up their voice when the decision-makers allow for it. This is already a crowded and shrinking space in of itself. When it is the institutional Church, with official voice, this is less of an issue, but then it is sometimes more difficult for the Institutional Church to say certain things and to challenge certain powers – because it is also in a position of power. Coherence and consistency can be a challenge there. The Church itself does not always lead by example when it comes to ecological conversion or changing power relations and this is a weakness in political debates. There is also often a risk that Faith Actors not be seen as experts or credible on what appear to be more “technical” or “specialised” discussions. There are experts, and they must be put forward. And expertise is not always technical. Wisdom and indigenous knowledge should also be valued and this the Church and Faith Actors can continue to shed light on.

Qs: Laudato Si set a frame, the European Laudato Si Alliance (ELSiA) the working team; what should come next?

Connection with other voices (including in other continents), listening, learning from others who have come before us, who are struggling and fighting courageously. Name the challenges, the contradictions and expose them so that we can look for new paths of solidarity for the Common good. As Europeans, we must champion and be an ally, but not replace or substitute our voices for those that know what it is to live in ecological crisis. This being said, we need to take responsibility for our own behaviours and choices, and act as an example of conversion. We need to promote a new approach to our economy and political environment – a courageous and radical example that transformation and change are part of life. We need to create space for something new to be born and not be afraid to push and keep promoting our messages, and challenging, and questioning the current state of the world.

Thank you very much for providing us all with a very valuable insight, and thank you for accepting our invitation to participate in our series.