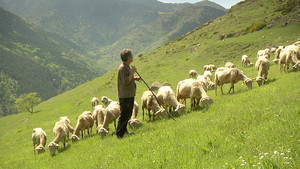 Responding to ever-louder calls for a radical overhaul of the Common Agricultural Policy (‘CAP’), MEPs have recently voted in favour of measures to help small farmers. In this article, environmental lawyer Henry Longbottom SJ (JESC) considers a range of voices in a debate about public funding of rural activities.

Few would deny the importance of farming to Europe’s identity. The intricate patchworks that make up our rural landscapes result from centuries of careful interaction between humans and nature. Throughout the ages, the countryside has nourished bodies and souls alike. In recent years we have also become acutely aware that responsible stewardship of our farmland ensures water quality, reduces flood risk, and helps protects wildlife.

A rural exodus
But the European farming sector is in crisis. Farmers are finding it increasingly difficult to make a living from the land. This reality is borne out by a few statistics. In the 1960s a fifth of Europeans worked in agriculture. Today the figure is below 4%. Between 2000 and 2012, approximately 4.8 million jobs were lost in the European agricultural sector. Moreover, the hardest-hit group are those under the age of 35. This age group currently represents a mere 6% of farm workers. Put simply, the countryside is undergoing a population implosion.

This bleak situation has led to increased demands for reform of the Common Agricultural Policy (CAP), a scheme that hoovers up a hefty 40% of the EU’s annual budget. In spite of its immense expense, farmers throughout Europe are deeply unhappy with the CAP. It is significant that even though the average UK farm receives over half its income from CAP subsidies, farmers in England and Wales voted overwhelmingly in favour of BREXIT.

Small is beautiful?
The main source of discontent is that smaller and more labour-intensive farms have suffered under the CAP’s focus on food production. It is estimated that between 2005 and 2010, over 2.5 million small farms were shut down. Given that 10% of the largest farms receive nearly 75% of CAP payments, critics argue that the EU is effectively subsiding large farms.

This is where the French Socialist MEP Éric Andrieu enters the stage. Andrieu is responsible for a report entitled ‘How the CAP can improve job creation in rural areas’. A leading critic of the EU’s obsession with export competitiveness, Andrieu argues that the alarming haemorrhaging of young people from farming must be tackled. His report, which MEPs narrowly voted in favour of on 27 October 2016, sets out a raft of proposals, including measures to boost training for young famers, financial help for new entrants into the farming sector, and a fairer distribution of direct payments to farmers. Subsidies should be favourable to smaller farms and direct payments should be withdrawn from those who simply own (but do not farm) agricultural land. The MEPs also accepted measures to encourage shorter supply-chains and promote more organic food production.

The CAP: a behemoth to be slain?
Whereas Andrieu’s proposals are premised on the basis that it is possible to readjust the CAP to make it more equitable to smaller farmers, others propose the abolition of what they regard to be an inherently flawed ‘behemoth’, incapable of reform. This is the view of Professor Dieter Helm, an economist at Oxford University. Helm believes that BREXIT provides an opportunity for the UK to ‘reset’ farming policy and learn from the mistakes of the CAP. Whilst belonging to a free-market economic tradition, Helm nevertheless accepts that rural activities will always need public funding. However he argues that public money should be used to incentivise what he calls ‘public goods’, rather than simply subsidise food production. For Helm, there needs to be a public debate about what should be considered a ‘public good’. This would certainly include the environmental and recreational value of non-urban contexts.

More than just crops
Despite their different methodological starting points, both Helm and Andrieu agree that the ‘capital’ of the countryside consists of much more than simply the financial value of the physical goods farmers produce. They are critical of European economic policy that characterises the countryside’s value purely in commodity terms. The CAP has overlooked the role that small farms plays in providing employment, and as a means to protect the traditional character of rural landscapes. According to Andrieu and Helm, public funding, whether through subsidies or incentives to promote ‘public goods’, should be indexed to wider social benefits and environmental sustainability, and not simply used to reward production.

At this point it is worth pointing out that there is a third figure who has something to contribute to the debate. Pope Francis has often spoken of the dangers of economic systems that favour large-scale production models, especially in the agricultural sector. For this reason, Laudato Si’ affirms that civil authorities have a duty to ‘adopt clear and firm measures in support of small producers and differentiated production’ (LS, 129). In the philosophical language of the encyclical, such measures are necessary to avoid destructive instrumental and technological uses of the natural world, but also to protect opportunities for work: ‘we were created with a vocation to work’ (LS, 128).