Home EUROPE Don´t give up hope! Insights from Laudato Sí in times of crisis 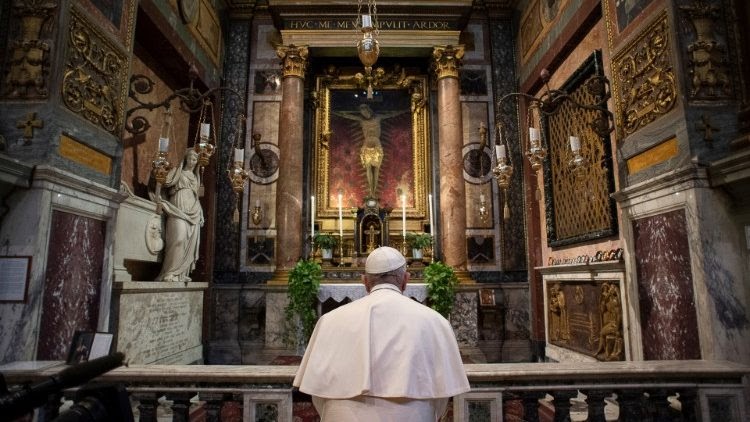 In the present situation of confusion and dismay, a first thought should go to the victims of the corona pandemic. There is so much suffering and despair all over the world. There are so many families affected who even cannot say goodbye to their beloved ones. As always the poor are the most severely hit. How shall people in a country like El Salvador survive under confinement, if they earn their poor living on a daily base selling fruits in the streets? But there are also many signs of solidarity and hope: medical doctors and nurses who risk their lives caring for the sick; hospitals who are receiving patients from other countries; a 75 years old Italian priest who is offering his life for a younger man.

It is too early to reflect on the consequences of this pandemic. But we can reflect on the awareness it creates. The corona crisis makes us aware that health is the most precious universal common good and that it is globally vulnerable. It makes us also aware that we are all in the same boat and one human family. The crisis makes us aware that we have to rethink and to reshape our present model of globalisation taking into account the poor, the natural environment and the future generations. Pope Francis with his Encyclical Laudato Si’ on the care for our common home offers a compass and a roadmap for this.

The main message of Laudato sí is that our world is a wonderful gift but that we are putting under threat its future by our way of living. That is why we need a fundamental change in our model of consumption and production. Pope Francis asks for an “ecological conversion”. A radical change needs radical motivations and a new mindset. A central insight of Laudato Si’ is that everything is deeply connected: the safeguarding of the environment cannot be divorced from ensuring justice for the poor and finding answers to the structural problems of the global economy.

The corona crisis is another demonstration of the interconnectedness of our world. In a couple of weeks, the virus has spread all over the world by people traveling. The virus doesn´t know or respect any frontiers. To stop the pandemic the countries must look and cooperate beyond their borders. We feel more and more interdependent from each other, we are all vulnerable, we are connected globally for the best and the worst. We should give up our collective short-termism and understand solidarity as an intragenerational and intergenerational challenge.

This is similar to climate change which is another central theme of Laudato sí. The Pope pleads to correct the existing models of growth incapable of guaranteeing respect for the environment, openness to life, concern for the family, social equality, the dignity of workers and the rights of future generations. Already five years ago he insisted on the gravity of the problems and asked to set in place a new civilization based on fraternity and equality. The current crisis shows that governments are able to take urgent, radical and very costly measures to face imminent danger. Why don´t we take comparable measures to face dangerous climate change? Climate change is not contagious but it is threatening the future of our planet and the decent living conditions of the future generations.

Another innovation of Laudato Si’ is to consider the atmosphere, the oceans and the tropical forests as natural global common goods. In the present crisis, we can add health as the principal social common good. The global common goods cannot be solely under the rule only of national states but they belong to all humanity. So the principle of the universal destination of goods must be applied. We have a common but differentiated responsibility for these common goods and to discharge that responsibility we need democratic governance of them. The European Union is a historical example of this.

In a pessimistic view, some people fear that the coronavirus can accelerate the disintegration of the European Union. At the beginning of the crisis, there were reflexes of “every country for itself” which went straight against the idea of the Union. In Italy, people asked painfully: “Where is the European Union?” In the meanwhile, the EU has come up with some concrete measures of solidarity: French or Italian patients in serious conditions who were received in German hospitals, exchange of medical materials between member countries. It should extend urgently also to the refugees who are living in inhuman conditions in the camps of the Greek islands and are seriously threatened by the virus. But in the long run, the major challenge will be how to handle in a spirit of solidarity the deep threats on the economy. We are all in the same boat and we will survive or sink together.

In a number of recent articles in the newspapers very fundamental questions came up about the meaning of life and what we are doing, about what is the vocation of human beings in this world. Non-believing humanists pointed to the crisis as a kind of “secular Lent” which brings us back to essential values like life, love, and solidarity and forces us to relativize many things which till up to now we considered indispensable and untouchable. We shouldn´t instrumentalize this crisis in the sense of justifying Christian values. But principles of Christian social thinking such as human dignity, solidarity, the preferential option for the poor and sustainability can be guiding principles to build up a new model of economy and society after the pandemic.

In times of disaster inevitably comes up the question: Where is God in all this? God is in the victims of the pandemic, in the medical doctors and the nurses who care for the affected, in the scientists who relentlessly search for an antivirus vaccine, in the volunteers who are committed for the needy, in the workers who keep running our daily life, he is in all who are praying in these days for the others, in those who keep alive hope.

Stop the violence in Ukraine

Listening with the ear of the heart

Together for an integral ecology