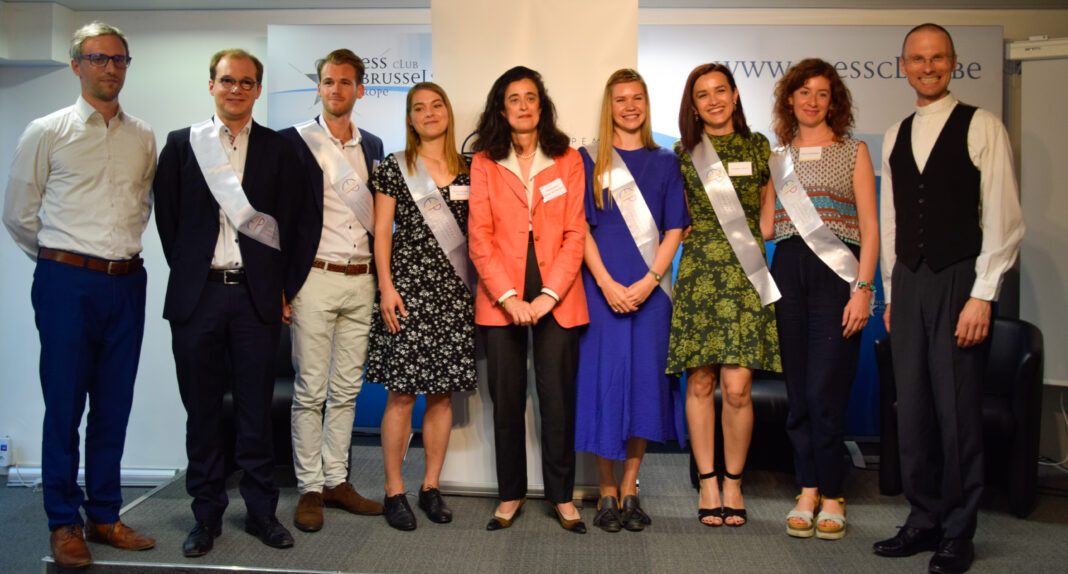 The KNA, the German-speaking Catholic news agency published an article on the Graduation of the 3rd cohort of the European Leadership Programme that took place on the 25th June 2020 at the Brussels Press Club – in the very neighbourhood of the EC Berlaymont and Justus Lipsius building.

They underlined that among the hundreds of networks, trainee programs and grants available in Brussels, the Jesuits have a specially crafted formation on offer, where the focus is not on the career, but on people and their vocation. They captured all the excitement and joy that was present during the festive moments of Graduation, describing the big evening of Klara, Bartholomäus, Silvia, Donát, Slađana and Hanna coming from Germany, Austria, Hungary, Poland, Italy, and Sweden.

Visions for the common good

As reported in the KNA, ELP “is a programme for the hearts and minds to navigate through challenges,” as said by Peter Rožič, the director of JESC at the closing ceremony. Passing on education is in the DNA of the Jesuits – it allowed the Fellows to come together and become more open towards each other.

Debates at the kitchen table

As the article described, there were debates around the kitchen table of the two shared apartments in which the Fellows lived. “The debates were intense around our kitchen table, we wanted to understand certain phenomena, and haven’t accepted simple answers,” said Bartholomäus Regenhardt in the closing speech of the third cohort of the ELP.

The 31-year-old lawyer from Düsseldorf was speaking enthusiastically about the programme, emphasizing the importance of its international dimension. “Corona forced us to live with “strangers” for 24/7. That was challenging,” he said. “It felt like mini-Europe,” added Bartholomäus. “You could see how the cultural impacts shape you. Everything was discussed at the kitchen table with French wine, Italian pasta, Croatian bread and Hungarian goulash – from EU enlargement to the EU response to the Corona crisis.”

The participants of ELP called their kitchen table jokingly  “DG Future” as DG stands for the Directorate-General, and the EU Commission has 33 of them. In this DG the decisive factor was the power of argument and not the argument of power. “Culture, not war, became our guiding principle at the kitchen table,” said Regenhardt. They learned that nothing works without compromise in the EU. “However, there is one area where we do not accept compromises: our values,” he said.

The values, the discussions and the network were some of the reasons why Klara Wuketich from Austria applied for the programme, she told the KNA. The 25-year-old now ELP Alumna studied environmental and resource management as her Bachelor, and European Studies with a focus on the management of EU projects as her Master in Austria. In 2019, she applied for a traineeship in the EU Commission and got accepted. She learned about the programme from JESC Secretary for Leadership and ELP Manager Botond Feledy, whom she met in Taize a few years ago.

“I chose the programme because I did not only want to do an internship in Brussels, but also because I wanted to be socially involved,” she explained. She found it particularly interesting to hear from different leaders how their faith is reflected in their daily life. Klara valued tremendously the community among the participants that was formed during their stay during the confinement in Belgium: “If I hadn’t been part of the ELP, I don’t know if I would have been able to cope with these difficult times of the Corona-crisis in Brussels as a trainee,” she shared. Her plans take her back to Vienna to the Diplomatic Academy, but she would be gladly working again in an international organization or a company in Brussels. “I particularly liked the city because all the people I met were so open,” she said. We can definitely agree with her: the capital of Europe offers many opportunities to be discovered.

Why Corona Virus is Exposing the Urban Poor in Africa