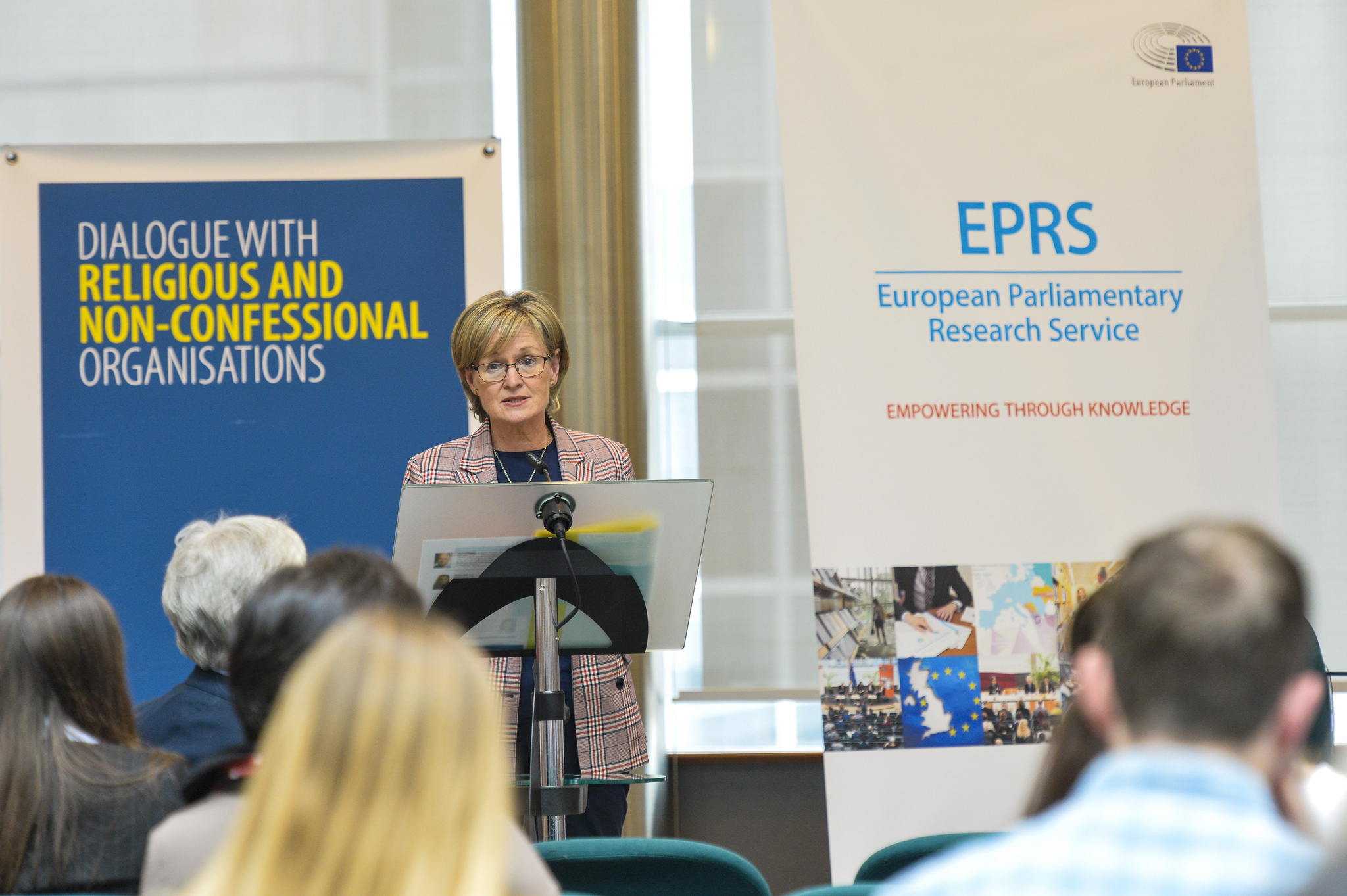 On the 4th of December, the European Parliament held a Dialogue Seminar on the topic of Religion and Human Rights, hosted by the First Vice President of the Parliament, Mairead McGuinness. This event fell under the frame of Parliament’s implementation of Article 17 of the TFEU, which includes that “[…] the Union shall maintain an open, transparent and regular dialogue with these churches and organisations”, whose coordination and implementation is the responsibility of FVP McGuinness.

Opening the event in a well-attended venue, Ms McGuinness’ introductory remarks contained a brief reflection on the recent Fundamental Rights’ Forum in September in Vienna, where a workshop on the engagement of religious actors was facilitated. She also included a call for feedback on Parliament’s facilitation of Article 17.

Michael O’Flaherty, the director of the EU Fundamental Rights Agency, was responsible for the second half of the introduction, which touched on specific human rights issues in the European Union with regards to poverty, migration and ethnic or cultural isolation from state and society.

Following this were two debate panels, whose participants each gave a 5-10-minute presentation, followed by a Q&A with the attending audience. The first panel concerned evaluating the EU’s framework for defending human rights in the EU and was chaired by MEP Marek Jurek from Parliament’s Committee on Civil Liberties, Justice and Home Affairs. After an opening remark by Ms Birgit van Hout of the office of the UN High Commissioner for Human Rights, the three panellists each gave their presentations. In these, the topic of state legislation against certain religious practices was raised, first by Jair Melchior, Chief Rabbi of Copenhagen, and later Fr Olivier Poquillon OP, Secretary General of COMECE*, who also introduced the practice of cross-religious defense of one another to the debate.

The second panel was on Human rights challenges and solutions in the EU, chaired by MEP Tomáš Zdechovský, also of the Committee on Civil Liberties, Justice and Home Affairs. The panellists presented their respective religious histories on the idea of various human rights. Among other things, the topic of the relationship between religious freedom and other regards, such as the rights of animals and ritual slaughter, was discussed. MEP Virginie Rozière, Co-Chair of the European Parliament Platform for Secularism in Politics, acted as the rapporteur for this panel and noted that the relationship between religions and human rights has been and can be dysfunctional as well as functional.

At the conclusion of the Dialogue Seminar, the speakers, speakeresses and the audience were invited to partake in a small reception and, as FVP McGuinness phrased it, give everyone a chance to continue the discussion, as well as meet and greet the panellists and each other. While this is a good opportunity to greet old friends and meet new ones, there is quite the innate value in an informal setting for the facilitation of constructive debate and cross-perspective exchanges, and it is a most appreciated initative. Great political deals have been struck over a pint between politicians, who otherwise wouldn’t fare well with said project in a formal parliamentary gathering or meeting, and McGuinness’ closing remark echoed this notion as she invited the crowd to join this venue: “Sometimes the best conversations are the informal ones.”

Indeed, it is doubtfully a coincidence that the MEP café in the Parliament in Strasbourg is located across from the Hemicycle, and it may have borne witness to many a breakthrough.
* Commission of the Bishops’ Conferences of the EU

The European Parliamentary Research Service, EPRS, provided a briefing of the topic, which is available here