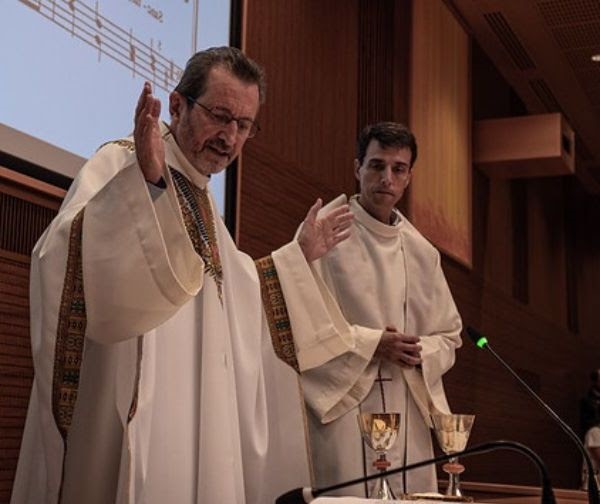 ¨The start of the Congress, with the commemoration of the Martyrs, was strong for us. This could sound depressing, but on the contrary they are a sign of hope for us. They gave all the participants a sense of hope and renewed energy to continue being involved in Justice and Reconciliation.¨

Father Franck Janin SJ, the President of the Conference of European Provincials, gave his thoughts on the Jubilee Congress in Rome on the 4th to the 8th of November on the occasion of the 50th Anniversary of the Secretariat of Social Justice and Ecology. The JESC team interviewed him to collect his impressions on the importance and impact of the Congress.

Alba Requejo: Thank you for accepting the JESC team invitation to interview you on the occasion of the 50th Anniversary of the Jesuit Secretariat of Social Justice and Ecology. Before moving into more specific areas, we would like to know your impressions of the Jubilee Congress and the participants involved.

Franck Janin SJ: The most impressive thing about the Congress was the involvement of the participants. There were more than 200 participants, Jesuits, and lay collaborators. Meeting them and realizing that they are very devoted people, some of them untiringly involved in social affairs and justice and others strongly committed to helping refugees, migrants and prisoners. There was even one of them working with gang members in Los Angeles. This full encompassing experience gave me a feeling of joy and a sense of hope. Moreover, one hundred invitations were sent out, however, double that number of participants attended the Congress and this further reflected the widespread interest in creating a better future for our world. As the conventional saying goes: Good does not make noise and hence, those congregated in Rome are not part of the newspaper headlines. However, they make a big difference for many people. Other highlight were the testimonies of social justice activities and the personal testimonies and reflections about daily endeavors that follow the goodwill. Besides, we were lucky to have a special audience with Pope Francis. He remembered Father Pedro Arrupe SJ, our Spanish Basque Jesuit priest, who served as the twenty-eighth Superior General of the Society of Jesus (1965–83). He started the Secretariat for Social Justice and Ecology 50 years ago. However, the concepts of Justice and Reconciliation are not newly mentioned within the Society of Jesus. They date back to our Society of Jesus Foundational text ‘Formula of the Institute’, where our founding Father St. Ignatius of Loyola speaks about Reconciliation.

AR: In relation to the testimonies, which was the most striking one for you?

FJ SJ: The most striking for me was the testimony of a Jesuit working with gang members in Los Angeles. Someone asked him: ¨Do you guide them towards God?¨, given that it is the first Universal Apostolic Preference. He replied: ¨No, they show me the way to God.¨ The answer with an inverted approach to the presumed flow of help, as in the poor receiving help, made us further understand that when we are in contact with the poor and the most excluded, they will teach us about life and values and what is important in life. Maybe because during their lives they missed love, being listened to and looked after they can now teach us how important these aspects are in order to have a fulfilling life experience. We can engage in social justice by engaging with those who are suffering from injustice. I consider it is very important to encounter them with a perspective of ¨I am going to solve a problem for them¨, instead of ¨I will learn something from them.¨

There was also a participant at the Congress who works in China and he showed us a document in Chinese which contained annotations in the margin. He made the statement  “You cannot understand the text if you don’t read what is in the margins ̈. He used this text to stress that the margins are there to help us understand the core content. There is a subjacent analogy, meaning that the world needs to listen to the people who live at the periphery because they will teach us how to understand the world more clearly. Pope Francis stated the same about peripheries, which are helpful to understand the center and what needs to be changed.

AR: In relation to this full-encompassing approach on social welfare, when you were appointed President of the Conference of European Principals (CEP) in 2017 you stated that “Europe is looking for a new vision”. What is this new vision?

FJ SJ: I made this assessment two years ago, but the situation today is the same if not worse. Some examples we can draw on are the Brexit saga, the Italian political turmoil and the rise of the extreme right in Spain. The use of new vision is a bold statement but it essentially means that we need to find ways to put people at the centre of our concerns. It involves connecting solidarity, hospitality and social justice values with our actions. It involves avoiding economic instability and fears to move our actions. The latter approach leads our countries to adopt protectionist policies by closing their borders and spreading messages of reluctance for the Other. However, when compared to what is happening in Latin America, in countries such as Bolivia and Venezuela, the European model is outstanding. In some domains it is fragile, but we were able to put together different countries that come from diverse backgrounds and cultures. That achievement was almost a miracle. Do we want to go back to adopting frontiers and borders towards our neighbours? Division is not a solution to tackle global concerns such as Climate Change. Building walls between each other is not a solution either. The new vision is about a world where everyone can live and has the right to live.

AR: As the President of CEP, what are your proposed lines of strategy?

FJ SJ: We are already working a lot in many ways. Instead of looking for new ways of working and expanding, I follow the lines of our former Superior General in relation to his perception of the Globalisation of Superficiality. He was advocating for more depth. The importance is not set on expanding the scope of areas for improvement, but to seek depth in those matters already addressed. At the level of the European society, we had already two meetings with those in charge of the European Provincials and we are working on a plan for the next five years for how to implement the Universal Apostolic Preferences. We are already very much involved with Youth and we have a cluster on Ecology. For instance, in universities such as Oxford, the Jesuits in Britain opened the LAUDATO SI’ INSTITUTE for integral economy.

AR: Besides following and trying to go into depth in previous practices, are you accountable for any initiative?

FJ SJ: When I was appointed President the Universal Apostolic Preferences were not entirely defined. I continued with the legacy of the Former President. As Jesuits, we had to reflect on many topics. We had to discern and understand the Universal Apostolic Preferences, which took us a long time as the implication involves a worldwide network. Besides, I also accompanied and contributed to the project of the European Leadership Programme, as the Jesuit European Social Centre Director Peter Rožič SJ commenced his Director position in the same year as I did. Another exercise we have initiated among the Jesuits of Europe is reflecting on dialogue and reconciliation. We sense and witness the power divisions have on society and we are trying to work on unity. For the past two years, we are more focused on the work of reconciliation within ourselves.

AR: In line with creating dialogue for reconciliation within Europe, how do you think Ignatian Spirituality helps in creating bonds between interculturality, faiths and religions in such an eclectic Europe?

FJ SJ: The Ignatian Spirituality consists in adopting a very positive view towards the world. The motto of St Ignatius of Loyola is to see God in all things. There is a strong conviction that the Spirit, the love and the truth of God is present in every culture and in every human being. There are no borders for the action of God in the world. And this is the basis of what is very strong in our Spirituality. The mentality goes as follows: ´When I am in contact with another culture, religion or belief, I learn something from them, I discover beauty and goodness. I discover other truths. God is active in every heart.` The basis of Ignatian Spirituality is a dialogue which serves as a wonderful opportunity because we get to learn something. There is a common humanity in each of us and we can discern it. This implies having the capacity to look at the presence of God’s essence in everything. We train in the Ignatian approach to apply it when we meet people and encounter situations.

AR: I will go back to a topic addressed in the Jubilee Congress. ´The torches of light and hope` is the metaphor used to refer to the 57 Jesuit Martyrs who were killed during the past 50 years while seeking social justice in different communities worldwide. How do you think this has united and strengthened the Jesuit community?

FJ SJ: One of the strongest impressions we received from the Congress was the testimony about the 57 Jesuits murdered during the past 50 years and their collaborators, who were also murdered. We were given a book which remembers each Jesuit murdered while accomplishing his social mission.

For instance, last week in Brussels we commemorated the death of six Jesuits, who were murdered in El Salvador. We make a ceremony to remember them each year. They are memories in our hearts that we bring back to life every time we mention them. The Jubilee Congress started with the commemoration of the Martyrs. This discussion was strong for us. It is not depressing; on the contrary, they are a sign of hope for us. It enhanced our hope and gave us renewed energy to continue with our goals toward Justice and Reconciliation. Moreover, some of the Martyrs will be canonized. These Jesuits are very much alive for us. As an example, I was in Lebanon where a Jesuit Father was killed and in the village, his memory is very alive. He spent ten years with the local community and contributed to changing lives for the better.

In Europe we are safe, but Jesuits in dangerous regions are more prone to suffer this fatal destiny. Today they are examples of people who kept humanity alive. The memory of our Jesuit Martyrs and their collaborators encourages us to keep going with high hopes and renewed energy.