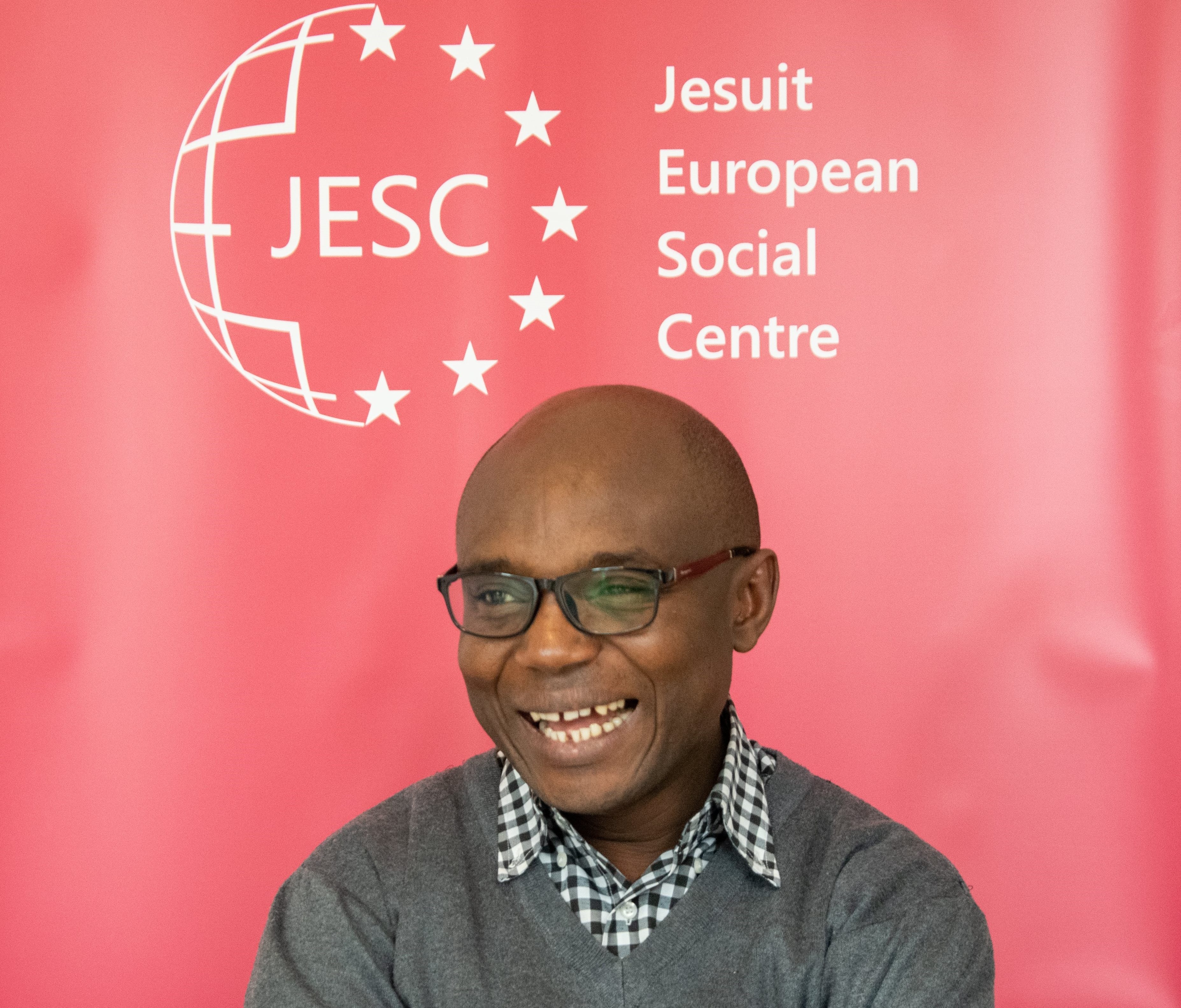 During a special visit to Europe, Charles Chilufya SJ, Social Apostolate Coordinator and Director of JENA (Justice and Ecology network in Africa), joined us at the JESC office in Brussels.

We had a fruitful exchange of views and it was really interesting to see Europe from an African perspective. “From Europe, we don’t want charity but participation and collaboration,” he said.

Fr. Chilufya, what is the African version of our European Leadership Programme?

It is called the Leadership Diamond Africa Plus Programme. We chose the diamond as a symbol because it has four corners that for us represent four fundamental values: ethics, courage, reality, and vision. In order to face a problem, a leader needs to grow inside this diamond – that is also a symbol of hardness. In a Jesuit interpretation, it ultimately means strong spirituality.

It’s important to say that we don’t just provide spiritual coaching – we are quite focused on technological research and development in order to link the economy and education. We also advocate promoting policies to find the right type of education according to the needs of our economy and society.

What is the aim of the programme?

We want to educate people to see opportunities in Africa. These are the same opportunities that Chinese citizens are seeing and therefore they are coming to Africa in significant numbers, not only to work in big companies but also to start small commercial businesses.

The aim is to form young people between the ages of 18 and 30, undergraduates and postgraduates, in the main cities of Africa.  We are training trainers in eight major cities like Kigali and Nairobi. But we want to reach all of Africa, so we are implementing another online training programme.

Are you trying to prevent African young people from moving to Europe?

Of course, especially when they try to make it through illegal and dangerous journeys. Leaving is not a solution. We want people to stay and to invest in their personal development. We need to form a new generation of African leaders that face reality and say: ‘I can make a difference,’ no matter how difficult it is. No matter the corruption and the injustice. People must feel in charge of their fate. We contrast fatalism with religion, with the Jesuit values, of reinforcing inner spirituality. People must have the courage to stay and have a vision for Africa.

What is the role of Europe?

Europe’s future is tightly linked to Africa. We don’t want charity but participation and collaboration, for example on the issue of tax evasion. Africa loses 50 billion dollars a year to western countries in tax revenue that’s not paid. I’m talking about companies based in Africa that pay their taxes in Europe, or they don’t pay it at all. There is another aspect of tax evasion that involves African businessmen who don’t pay taxes and put their money in European banks. This is not fair to the African people who work for low salaries or have to give up their lands where big companies have their plants or mines.

What can European institutions do to prevent this tax fraud?

We had a big conference in Nairobi on Tax and Justice last year. We are planning a follow-up workshop in November in Brussels. These transactions that end up with losses of tax revenues happen at an international level, so the investigation into them must be international too. We don’t need more legislation but transparency, we need more investigations. It would be useful to have a body like the World Trade Organization, called the “World Tax Organization” or the “Global Tax Regulation” body. Corporate power has become bigger, so we need global governance to respond to it.

Therefore we want our concerns to reach the European institutions and for them to prevent, for instance, the European Investment Bank funding mining companies that do not respect labour laws, as has happened in the past.

What are the African countries doing?

The African Union has recently chosen its theme of the year and, for the first time, it is migration. They have waited a long time before deciding to face this issue.  Do you know why?  Because seeing this huge number of people leaving to Europe is shaming. In Africa, 77% of the population is under the age of 25. These young people need jobs, but, above all, they need hope.

The Power of Spiritual Conversation for our Broken World

IXE Statement on the Asylum and Migration Pact