The devil hides in the details, but very often he also lies low in the lack of detail. This is the situation regarding the laws and guidance governing the mining sector in DRC, which are weak and ineffective from the point of view of human rights, environmental protection and the common good.  Recognising that a robust domestic legal framework is essential to bring about a fairer and more transparent mining industry, Jesuits and their partners have been involved in proposals to reform DRC’s mining laws.

The Centre d’Etudes Pour l’Action Sociale (CEPAS) is a Kinshasa-based project of the Jesuit Central Africa Province. Its basic mission is to promote integral human development through research and analysis.

By organising conferences, workshops and publications, CEPAS provides a platform for an honest exchange between civil society and DRC’s decision-makers. An example of this activity was its les journées sociales, which took place last week. This programme brought together members of various organisations, and CEPAS’s director Pére Alain Nzadi SJ welcomed Aubin Minaku, president of the State National Assembly, who gave a lecture on democracy and the public’s perception of the state. 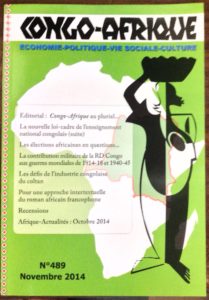 In addition to its publication of Congo-Afrique, a journal exploring economic, political and cultural topics, CEPAS produces studies and policy papers on a variety of issues.  A subject CEPAS has devoted a lot of energy to over recent years is the reform of DRC’s mining laws. A decade ago, under the leadership former director Pére Ferdinand Muhigirwa SJ, CEPAS helped initiate a review of the DRC’s “Mining Code”, the corpus of laws and guidance regulating the mining sector. 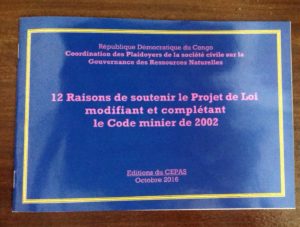 Sadly the legislative project to revise the Mining Code has stalled, and it is unlikely to be put before the DRC Parliament within the foreseeable future. A powerful mining lobby which profits from the currently feeble Mining Code has from the outset fiercely resisted any reform proposals. At the same time, widespread political corruption and links between politicians and mining interests have compounded an already lethargic response of the Kabila government to instigate and pursue reform. Present political instability and imminent budgetary and electoral crises have further overshadowed the mining issue on the legislative agenda.