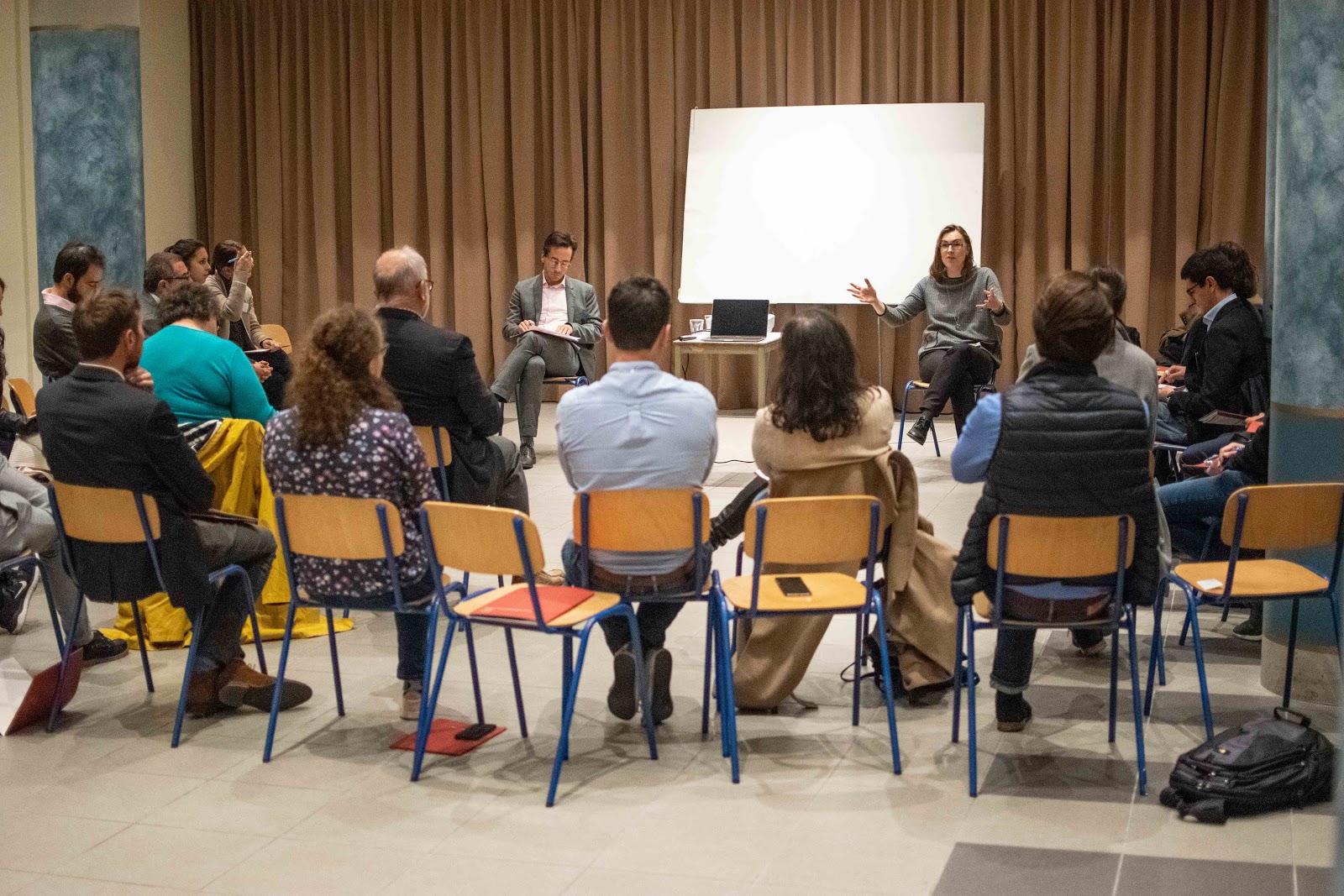 The Weekend Seminar Call to Public Life was held from the 11th to the 13th of October in Brussels, hosted majorly by the facilities of the new Jesuit Collège Matteo Ricci. The intention of this three-day Seminar was to Call people to engage actively in their Community and Public Life. A set of questions were raised during the sessions, hence, creating a space for dialogue and aiming to build upon a constructive approach on the European Union Project and besides, understand our rights and responsibilities from different levels of advocacy and citizenship. Social matters were alternated with spiritual sessions for an in and out conscience experience.

¨To be engaged, aware of huge problems in our society: How do we achieve our goals in political life?¨

​¨Can we rediscover our passion by sharing our hopes for a better world?¨

¨How to develop its social leadership: Ensure that people are respectful, listening to each other, sharing common values?¨

The Jesuit European Social Centre, jointly with the Jesuit Alumni of Europe (Part of the World Union Jesuit Alumni), were the organisers of the Seminar. The activities were potential insights into the functioning of the European Union, to Living in Community following Spiritual guidance and to provide with further understanding of the concept of Leadership. This was especially interesting from the point of view of the European Leadership Programme Fellows, who also participated in every session of the Seminar.

The idea of organizing a Seminar to shed a light on Public life matters emerged from the assumption that it is a Social pillar which enables people to understand current realities and find solutions to make visionary changes for a better future. Given we share a Common Home, Public life cannot survive without a shared consciousness that gets a say on direct representation organisms and is projected by decision making bodies in this case of the European Union.

Even at the best of times, civility should not be a trivial concern. Beneath this surface lie all kinds of passions and irrationality that needs to be listened to and be expressed as common objectives. Leadership today is about finding ways to become a citizen that is conscience about himself and has consciousness on his surroundings and people.

The opening session, held at the Jesuit Collège Matteo Ricci, started with an introductory speech by JESC Secretary for Justice and Ecology Edmond Grace SJ on Faith and Politics. Alain Deneef, president of World Union of Jesuit Alumni (WUJA) and the President of the Pouvoir Organisateur at the ‘Collège Matteo Ricci’, greeted all the participants and gave the word to JESC Secretary for Leadership Botond Feledy, who introduced the audience to the session’s speakers; Marton Hajdu, Joint Research Center, working at the European Commission, and Victoria Martin de la Torre, spokesperson for the President of the Socialists and Democrats Group in the European Parliament.

Ms. Victoria Martin de la Torre based her speech on her book “Europe, a Leap into the Unknown: A Journey Back in Time to Meet the Founders of the European Union”, an investigation into the ambitions and purposes of the Founding Fathers of the EU. She also gave an account on her experience working for the European Parliament. She was confident in her European values and set a comfortable environment for the commencement day of the CtPL Seminar.

On Saturday morning, Edmond Grace SJ led a meditation and prayer session that sought self-reflection. It was followed by the “Fishbanks” Role Play simulation exercise. “Fishbanks” is a simulation game about natural resource management in a competitive environment. Participants played the role of managers of a fishing company and their goal was to ensure the long-term success of their business. Several companies are fishing on the same sea at the same time – this leads to a business challenges and sometimes hard, strategic dilemmas as well. After some mental stimulation, it was time for some body awakening in the format of a Tour around the European Quarters led by Alain Deneef.

The second day of the Seminar concluded with an evening with Mr Diego Canga Fano, Former Head of the Cabinet of the European Parliament’s Former President Antonio Tajani. He gave his testimony on the European Union and the future of the institutions as an experienced EU staff member. The moderator this time was JESC Director Peter Rožič SJ, who opened the event with a reflection on the importance to exercise body and mind. The day ended with a nice dinner where there was space for some conviviality and conversation.

Sunday was the closing day. Edmond Grace SJ concluded the Seminar with morning meditation and prayer, followed by a solidarity, conscience and reconciliation workshop. The Collège Matteo Ricci hosted a moment of discussion on paramount values and reflections from the impacts and thoughts on the weekend. To finalise, the ELP Fellows had one last simulation game monitored by Bela Kuslits, Sustainability Expert. The STRATAGEM  is a computer-assisted simulation game developed for the UN and the World Bank to train senior experts. The Fellows impersonated ministers of a government through 10 election cycles (game rounds). They had to develop a developing country and convert it into a sustainable nation. They had to face decisions, circumscribed to a given description and portfolio, in five ministries: Food & Environment, Goods & Services, Energy, Population, Finance. While the model is relatively simple, its results are surprisingly realistic and often these can be directly compared to real-world historical pathways. All in all, it was a weekend where the highlights were community building, creating bonds, sharing values and debating about our European shared reality.