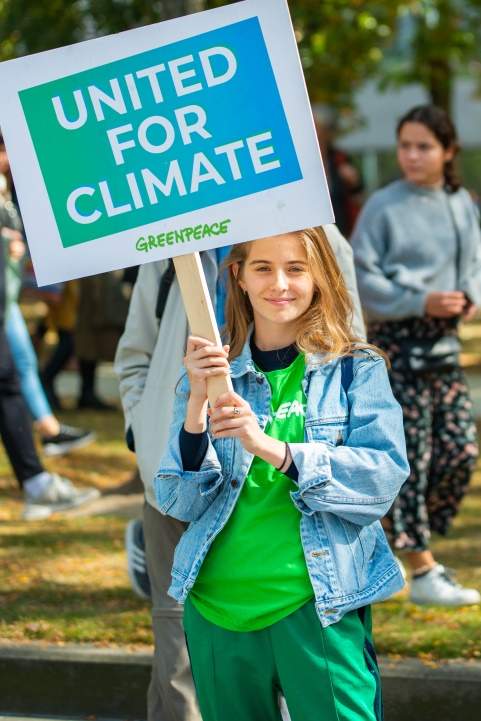 The Climate Change movement is rapidly taking shape: from voices in the air to a solid mobilization around the globe. Around 150 countries were involved in the global demonstrations inspired by young activist Greta Thunberg which started on Friday 13th September, embodying an international call of attention on the climate emergency. The past Friday 20th was the time for Brussels, which hosted a demonstration under the name Global Strike for Future Belgium III. This can be seen as a reflection of Europeans´ concern for the continent´s health, given that Brussels is at the heart of the EU, home to European institutions and the birthplace of environmentally sustainable directives applicable in the 28 EU states. This idea of sustainable action has its origins in 1991, when the focus was put on the reduction of CO2 emissions. JESC was part of the march and we spoke with some of the participants.

On 20th September at 13:30 Brussel Noordstation was the starting point for a vivid, invigorating and colorful demonstration, characterized by young smiles, the sympathy of older generations and the organizational commitment of twenty-five organizations. Such additional charge as expense or lease installment is excluded into the value accordingly it is sensible to apply for the Viagra prescription on the web. 20.000 civilians decided to participate in the act of openly proclaiming love for the Earth. The area was filled by a multiplicity of nationalities with one message: The Earth is one and we need to look after it. Twenty-five groups organized the demonstration, such as Avaaz, Greenpeace Belgium, Amnesty International Belgique Francophone, Youth for Climate, CNCD- 11.11.11, IUTC, Global call to Action Against Poverty and the European Environmental Bureau (EEB), within others.

The demonstration gave people a sense of hope. The Jesuit European Social Centre embarked on the march to call for action in the preservation of our unique planet. We interviewed some people to get the human flavour of this mass march.

The interviewees were chosen to include different samples of the population and here is what we found:

Qs: ¨So why are you taking part in this demonstration today?¨

¨I have been volunteering at Greenpeace Belgium since May 2017. I am from Gent and within Belgium, I feel like things are taking a course for the better; people are more aware of the topic. My concern is on Climate Change, the future of the Earth and younger generations.¨
— Greenpeace Belgium Volunteer.

¨I work for a programme supporting innovative Small to Medium-sized enterprises. Employees from EU institutions launched the group a month ago in order to mobilize colleagues within the institutions through climate change issues, deploying several types of action. More than 10.000 signed the declaration inviting leaders to take climate action.¨
— Project Advisor for Executive Agency for SMs Enterprises (EASME)

¨ I am Eastern Belgian originally and I wanted to support all these people in the demonstration today. My wife and I are very concerned about the future of our children and grandchildren. I am an engineer working at a factory so I also witness many wrongdoings. ¨
— A man in his 60s with a grounded view on Climate Change.

¨ Our school has a Climate Action School committee and we are encouraged to take part actively in these events. We are a big group, all that group that just passed running up the road.¨
— 15-year-old students.

Qs: ¨What do you do on a daily basis or your routine to commit to Climate Change Action?¨

¨I have four children and I teach them how to be concerned about the environment so they are busy with this purpose. For example, one is giving classes on Climate Change. I also grow my own vegetables, I go to work by bike, I have solar energy, I try to avoid plastics and I try to live in a sustainable way. I am vegeterian for 30 years.¨ — A man in his 60s with solid views on Climate Change.

“I speak a lot on Social Media. People contact me to send me information on Climate Change and I enjoy discussing around Climate Crisis. I strongly believe it´s not the individual actions but collective ones. It´s the responsibility of politicians to listen and care for their citizens by drafting and respecting Climate Change regulations.¨ — A Spaniard in his mid-twenties working for a Global Youth NGO based in Brussels.

¨I recycle, I eat less meat and I came here with my children who are 33 and 28 and my grandsons. Also, we only have 3 cars in the family for 20 of us. I think if we mobilise together we can tackle many horizons of Climate Change.¨ — A lady in her 70s who worked for a Shelter House for children.

¨We are here in the demonstration; picking up cigarette butts, because we want to contribute to reducing the nitrogen levels in the atmosphere and avoid the rubbish getting into the Ocean. We take the bus, use the same bottle for water daily, I shower faster and if I buy meat it is biological.¨ — 15 and 16-year-old girls.

There is hope and the change starts with each of us.

“The Earth will not continue to offer its harvest, except with faithful stewardship. We cannot say we love the land and then take steps to destroy it for use by future generations.” — John Paul II