What is a “conflict mineral”? The recently-approved EU legislation on responsible mineral sourcing defines a conflict mineral as tantalum, tin, tungsten or gold which originates from any region in the world affected by, and which is used to finance, armed conflict. Equivalent US provisions in the Dodd-Frank Act includes a wider list of minerals, but limits the conflict area to that of the Central African Great Lakes Region, chiefly the eastern Kivu district of DRC.

One of the many weaknesses of these legislative attempts to reduce the flow of conflict minerals is that they overlook the mining of copper and cobalt mostly carried out in the former Katanga province, located in the south east of DRC. Unlike the Kivu district, armed groups do not operate here. And yet, when it comes to the copper and cobalt mining sector, there are widespread social and human rights abuses. Although not linked to the financing of armed groups, these abuses nevertheless constitute “conflict”.

I experienced this situation first hand when I accompanied Père Jacques Nzumbu SJ and his colleague Criso from the Lubumbashi-based Centre Arrupe pour la Recherche & Formation (CARF) on a visit to two small scale mines in the area between Luisha and Kolwezi. The quaint description of these mines as “artisanal” disguises the pernicious reality faced by their workers and their families.

I was shown how artisanal miners descend down a shaft of 30 metres deep and spend up to 10 hours a day tunnelling underground to extract copper and cobalt which is hauled up to the surface in baskets. The conditions underground are hot and workers have rudimentary tools and little or no safety equipment. Tunnels collapsing, underground flooding, and inhalation of dust means that artisanal mining is extremely dangerous. Above ground, life is harsh too. Women and children are often engaged in washing the minerals in nearby lakes. The mining settlements are grim shanty towns with no public provision of services, or schools. Alcoholism and prostitution are rife. 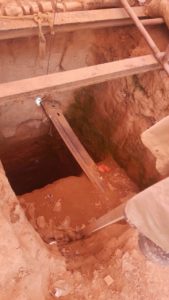 A strange paradox is that both of the artisanal mines we visited sat in the shadow of state-of-art mega-mines owned by international companies. Artisanal mines are often situated in concession areas granted by the Government to the mining companies. But in order to appease local populations, unofficial agreements are made between the companies, government officials, and security forces to turn a blind eye to artisanal mining activity.

The result of such such murky arrangements is that artisanal mining is unregulated and its workers have no protection. And the numbers involved are staggering. It is estimated that up to three million Congolese are engaged in artisanal mining, with a further 8 million being indirectly dependent on the sector. Human rights abuses are worse in artisanal mines controlled by unscrupulous businessmen who exploit men and women desperate to feed their families. Conditions are better where artisanal miners are able to organise themselves into cooperatives.

It is with these artisanal mining cooperatives that CARF is in the process of developing a project. The aim is to provide members of the cooperatives with a free training programme to equip them with knowledge and skills in safety, technical, and regulatory matters. The formation will use an industry-approved software and will be taught through a combination of on-site and online sessions. CARF is also exploring ways of how cooperatives can get a better price for their copper and cobalt which are currently sold to mostly Chinese dealers who pay for the goods well under the market price. 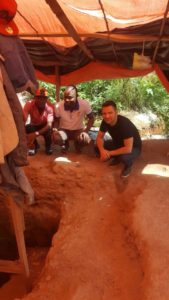 The hideous presence of artisanal mining in DRC is a product of destitution, bad governance, and an insatiable global demand for copper. The latter is only likely to rise in the coming decades with an increase in the use of battery-powered electric vehicles, which contain four times more copper than combustion engine vehicles.

Artisanal mines are here to stay for the foreseeable future. For this reason, CARF aims to improve the lives of artisanal miners by making their conditions safer and offering them training with the hope that they can eventually transition into the larger scale mining sector job market.