Home LEADERSHIP How to save the planet: An economical perspective 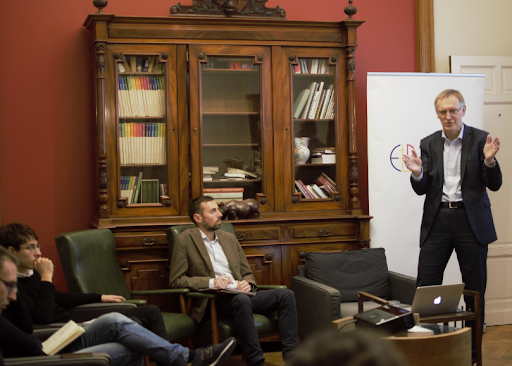 On Wednesday 8th of January, the ELP fellows had the pleasure to meet Janez Potočnik, former European Commissioner for the Environment, currently co-chair of the International Resource Panel. Researcher in economics, he worked as Minister Counselor at the Slovenian Prime Minister’s Cabinet from 2001 to 2002 and was Minister for European Affairs from 2002 to 2004, where he headed the negotiating team for the Accession of Slovenia to the EU. Within the European Union, he became Commissioner for Science and Research in 2004 until 2010 and was later nominated as Commissioner for the Environment from 2010 to 2014.

Mr. Potočnik provided us with a striking overview of the current overuse of natural resources. We throw away 1/3 of everything we produce. 30% of global biodiversity loss, 50% of climate change and 1/3 of air pollution is due to resource extraction. In the last 40 years, earth has lost 60% of living species.

Environmental externalities are not considered in the capitalist economic system

From an economical perspective, the harmful impact of human overuse of natural resources does not exist: it is not considered when calculating the production of wealth. This observation is a revealing example of the limits of our current capitalistic system. More precisely, it brings to light the real purpose of the capitalistic economy. Capitalism is all about growth, and not well-being. All the classical and neoclassical economic theories postulated that growth was a direct factor of well-being: when you have more money, you can consume more, which increases your individual satisfaction. This kind of perspective brought us to the current situation: aiming at increasing individual well-being, we forgot that it threatens the sustainability of our global well-being. We ended up in a system where human capital is under evaluated, the production capital over evaluated and the natural capital not evaluated at all.

Stopping the degradation of natural resources is not only dependent of the conjectural willingness of governments, it is first a problem of structure. If we want to save the earth, we have to rethink the entire organization of our economy.

It is tempting to lose hope when thinking about changing our entire economic system. Yet, Mr. Potočnik provided us with many realistic and hopeful solutions, acting on the supply or the demand.

Reducing natural resources use by acting on the supply

Today, we live in a linear economy: the producer sells a product to the consumer, and when this latter throws it away, it is society’s role to take care of the product, by recycling or destroying it. This organization of production influences companies to only aim to sell as many products as possible, including planning on the rapid deterioration, without thinking about the afterlife of the product. An alternative to this system is the notion of circular economy: rather than selling a product, companies should a service. For example, people do not want bubble light, they want light; they do not want cars, they want mobility. If the company is responsible for providing a service, for example the light in a house, it will plan long-lasting products. This system will create not a linear life of the product, but rather a circle, which is basically what is about circular economy. Going from a waste policy to a product policy might therefore be the solution.

Reducing natural resources use by acting on the demand

However, if we want to save the world before its early end, we do not only need to change the way we produce, but the way we consume as well. Decreasing the demand for consumption and preferring products produced ethically would be a relevant way to incentive companies to first produce less, and secondly be more accountable in the way they produce. But for this change to happen, we need to adopt a completely new state of mind, including a different way of life, and above all a new definition of what is a fulfilled life. We need to stop to bet on material element to achieve personal realization. We need to go from a society of having to a society of being. In that perspective, earth would not be something we possess, but rather something we belong to.