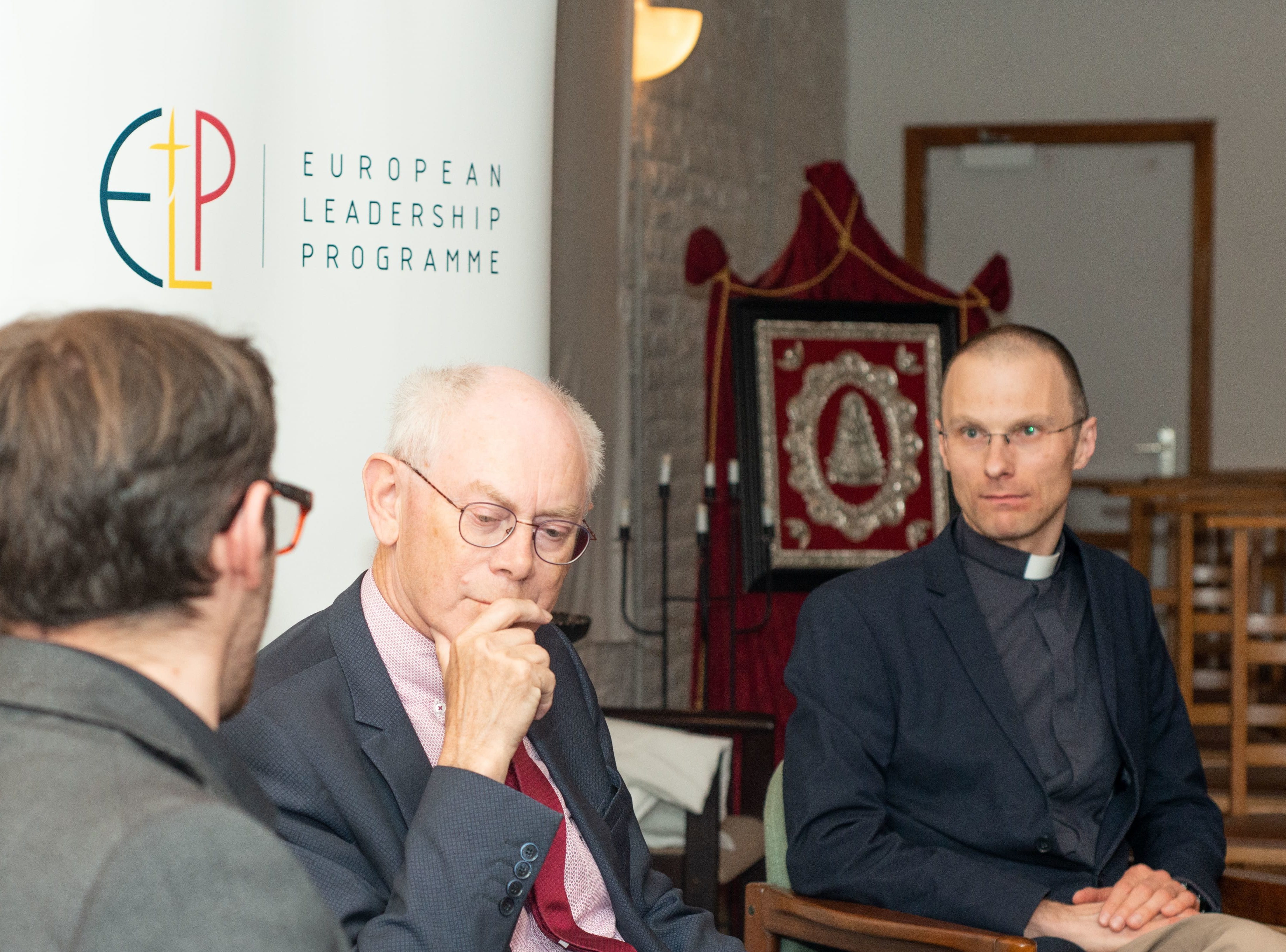 Former President of the European Council, Herman Van Rompuy, talked to the JESC team and European Leadership Programme fellows, on April 24. He spent a whole evening with us, in the chapel of the Foyer Catholique, in Brussels, answering questions raised by the ELP fellows, Director Peter Rožič SJ, and the JESC team. Below, you can read a report of the most interesting topics discussed.

“When I started my mandate in 2009 – Van Rompuy said- I never thought that I would have to deal with the Eurozone crisis, the Arab Spring, the war in Libya, the arrival of one million migrants in Europe and the Brexit debate.” During this warm and informal meeting, he shared his political experiences and personal views on politics, faith and leadership.

As President of the EU Council during those five years from 2009 to 2014, at every summit, he had to negotiate with, and lead, 28 heads of state. All have their particular personalities and domestic interests to protect. Van Rompuy’s job was to find points in common among them, no matter how different their positions were. “I have always been trusted by my colleagues and political opponents because of my ability to listen to everybody, even when they say things that I don’t like.”

He has always been aware of not being particularly charismatic, and he never tried to act as if he were, although during his childhood he was inspired by charismatic leaders. “I liked American President John F. Kennedy,” he said with a smile, “I was 12 when I started listening to his speeches.”

President Van Rompuy, how would you define populism?

Populism is a moral issue because it lifts people away from their responsibilities by always finding new enemies to blame. There is always somebody to blame. Somebody from another race, culture, religion or country. Populists have developed through negative thinking, something that is rooted in all of us.  They thrive especially in certain moments of history when people don’t feel protected by the traditional institutions. The aim of populism is for us not to live together, for us to be against each other, and this can bring about the destruction of society.

The only answer for hate is to love. We need good examples of people that react to violence with answers inspired by the Gospels, by love. The intellectuals have to stand up. It is not a moment to stay silent and to understand the populists’ ideas, it’s a time to react.

The Gilets Jaunes, and other movements in Europe have shown that there’s a hunger for participation in politics. Is there any space for them?

I don’t think that people want to participate in politics, I rather think that citizens are more interested in the results of politics. When they see results from politics then they feel protected. We have to take this need for protection seriously – that’s the only way to find reconciliation between citizens and politicians.

How important is it for a good politician to anticipate major events?

We can’t predict the future. That’s impossible. When I was President of the European Council, I didn’t predict that Donald Trump would become President of the United States. But making wrong forecasts doesn’t mean that we need to keep making the same mistake over and over again. So after Trump, for example, there might not be another Trump.

Brexit is another issue that was not foreseen by many. What’s your view on it?

Brexit is a populist project, a failed one. The message we sent to the Brits was clear: leaving is your problem, the caravan of the 27 will go on. In the grip of nationalism, the UK might become only England.

The media tends to emphasize EU divisions, but what happens when Europe manages to speak with one voice?

When Europe spoke at the Paris Conference for the Climate in 2015, it did so on the behalf of 70 Countries. When the EU is united it can achieve amazing results.

What would you say to young people that don’t vote in the European Elections?

To the younger generation that doesn’t perceive war as a problem, I say that Europe is still a beautiful peace project. If the Balkans were in the EU in the 1990s when the war there wouldn’t have happened. That’s why, after that conflict, all the countries wanted to join the EU, because they know that civil war can start again. I’m personally convinced that during the refugee crisis, there has been no war between European countries thanks to the EU. Imagine what would have happened while one million people were walking towards Germany.

Peace is something that will not always be there. It is not only about the past.

But Europe has also been actively involved in wars, like in Libya in 2012. How do you explain that?

I would never forget how difficult were those days when Gaddafi was bombarding Benghazi. It was a slaughter just a few miles from us, from Europe. We could not accept it. We did not want a new Srebrenica when 8,000 Muslims died in 1995 in front of our eyes.

We decided to intervene to prevent Benghazi from becoming a new Srebrenica.

But the European Union’s foreign policy wasn’t to intervene in Syria. Why not?

We thought that intervention is not always the right thing to do.  We realised that our intervention in Libya did not improve the situation in the country.  We supported the pro-democracy protests against former Egyptian President Mubarak and when democratically elected President Morsi took power in 2012, the first thing he did it was to change the Egyptian constitution to introduce the Shari’a (Quranic law). Then another coup happened and Morsi was arrested. I think that it is important for Arab countries to understand what they really want.

Brussels is the biggest hub for lobbyists in Europe, how did you deal with them?

I know somebody from the European round table of industrialists, the so-called lobbyists. I know that they meet each other, they exchange information, but please, don’t overestimate their work. They are very frustrated because they have not had that kind of impact on decision makers. The most influential group is Business Europe, the social partner of the European Confederation of Trade Unions. But they are not lobbyists, they are professionals.

What’s your vision for a professional vocation?

We don’t make ourselves, we discover ourselves. We receive a lot of gifts that are given to us. Our success is not in our merit, it’s in how we realize our vocation, starting from what we have. My ambition was to become a balanced person.  If you think that you are always right then there is no space for dialogue. I have inspired trust by listening to people around me, even the ones that I don’t like.

How would you define your political career?

I have been very lucky. When I became the speaker of the Belgian Parliament, I really enjoyed that work, I thought that was the high point and the end of my political career, but then I was called to lead the European Council.

How did you face the great difficulties involved with that job?

I worked hard and counted mostly on myself, I didn’t ask for anybody’s help.  I believe in God but I think that he’s too busy to help me with my job. I do my best with what I have and I let events inspire my decisions. I think that life is a combination of coincidence, faith and providence.

The Accidental Faith of the Predetermined Mind

Facing the Climate and Environmental Challenge: Insights on Political Leadership