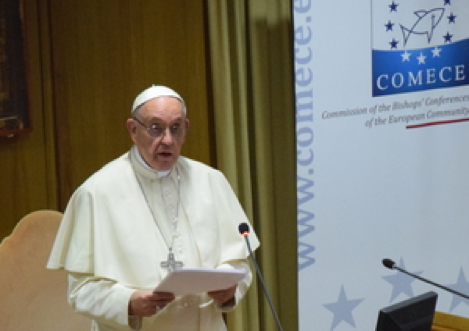 For Pope Francis the future of Europe is of crucial importance. For the fifth time, he delivered a speech on the topic of the continent where his family’s roots lie.

The high point of the “Rethinking Europe” dialogue in Rome was the eagerly anticipated closing address by Pope Francis. With sober realism he took as a starting point the plurality of cultures and religions in Europe, observing that “for many people Christianity is regarded as a thing of the past, both alien and irrelevant”. The audience sat up and took notice when he criticised secularist prejudice that “is incapable of seeing the positive value of religion’s public and objective role in society, preferring to relegate it to the realm of the merely private and sentimental”.

Although he may make fewer references than his predecessors to Europe’s Christian roots, Pope Francis is in no doubt that the countries of Europe have, over centuries, been shaped by the Christian faith. As already stated in his speech on accepting the Charlemagne Prize, he believes that the most important contribution made by Christians to today’s Europe is to ensure that the focus is on people. He clearly stated how today’s issues are so often reduced to discussions revolving around statistics – “There are no citizens, only votes. There are no migrants, only quotas. There are no workers, only economic markers. There are no poor, only thresholds of poverty. The concrete reality of the human person is thus reduced to an abstract principle, thereby rendering it more comfortable and reassuring.”

By contrast he valued giving people their human face, people who commit to responsibility that is genuine, personal and effective. There is an interesting resonance here to the opening address by Frans Timmermans, European Commission first vice-president. Timmermans pointed to one of the specific aspects of Christianity: the ability of a Christian to see the world through the eyes of others, “even if it is an African refugee drifting in a boat on the Mediterranean.”

Rediscovering a sense of community

The Pope declared that the second contribution made by Christians to the future of Europe “is to help recover the sense of belonging to a community”. He drew attention to this word “community” as the very word used by the founding fathers of the European project. A sense of community is the greatest antidote to the spread of individualism which leads to an uprooted society that lacks any sense of belonging or heritage.

The Pope defined the essential building blocks of this structure as dialogue, inclusion, solidarity, development and peace. In politics there is a fundamental responsibility to promote dialogue of any and all kinds. In this context, he also referred to the extremist and populist movements that are substituting the voice of dialogue with hate speech. Pope Francis counters this with a Christian understanding of politics as resisting trends to burn bridges, erect new walls, or appropriate power. Instead politics should seek the highest form of service to the common good.

Europe as an inclusive community

Speaking of refugees and migrants, the Pope called upon Europe to be an “inclusive community”, and quoted one of his leitmotifs, namely that migrants should be viewed as a resource rather than a burden. Some people may have found his next sentence somewhat of a challenge: “Especially when faced with the tragedy of displaced persons and refugees, we must not forget that we are dealing with persons who cannot be welcomed or rejected at our own pleasure, or in accordance with political, economic or even religious ideas.” Or, to put it bluntly: it is not Christian to take in only Christian refugees. But, realistically, he also called upon a political framework for the refugee crisis, and upon refugees to be readier to embrace the culture of the nations receiving them.

If Europe can rediscover itself as a community and reflect on the principles of solidarity, subsidiarity and the option for the poor, then, according to the Pope, Europe would become a “source of development, for itself and for the whole world.” He put forward a definition of development that extends far beyond the purely economic, as also set out in his encyclical Laudato sí. Essential elements include work and employment conditions that respect human dignity. In this context, he also found the words to praise Christian entrepreneurs who provide the best antidote to the “soulless globalisation” which, “more attentive to profits than people, has created significant pockets of poverty, unemployment, exploitation and social unease.”

At the end of his address, the Pope quoted from the early Christian Letter to Diognetus: “what the soul is to the body, Christians are to the world.” This quotation recalls a metaphor, ascribed to Jacques Delors, of “giving Europe a soul”. Pope Francis conveyed a sense of trust and hope that the Christians of today are fully up to the task.

Translated from the original text in German