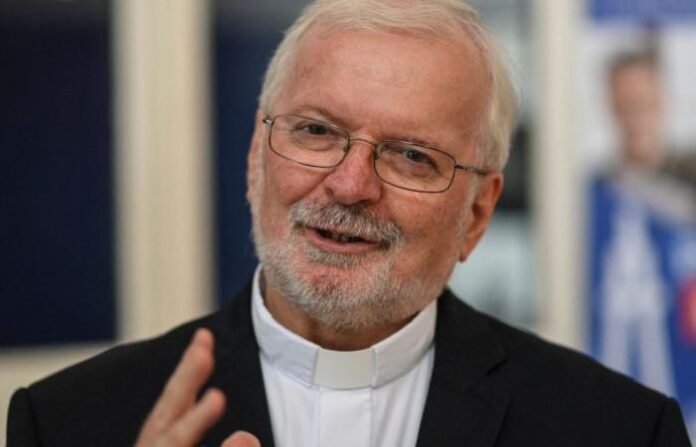 His Eminence Monsignor Aldo Giordano died this Thursday, 2nd December, due to Covid-19. He had been in intensive care for several weeks. Mgr. Giordano was the new Apostolic Nuncio to the European Union, he had arrived in Brussels on 13 August after seven years as Nuncio in Venezuela.

We of the JESC express our condolences to the members of the Nunciature for this new mourning, after H.E. Archbishop Alain Paul Lebeaupin, having concluded his service in Brussels, passed away on June 24th in Rome.

At the JESC we had not yet had the opportunity to personally meet Mgr. Giordano. But we had invited him to the annual residential triduum of the “Passion for Europe” group, in the retreat house of La Pairelle (Namur) for last September 25th. He should have attended the afternoon session entitled “Future of Europe: The spiritual dimension of resilience, condition for our common home future”

Despite having accepted the invitation, Archbishop Giordano wrote to us on September 17th that he had to renounce to participate with great regret, because he was in quarantine for having contracted Covid. He was asking us to keep the news confidential. But he assured: “I accompany you with prayer and affection”.

With some insistence we asked Mgr. Giordano to send us a video message, if his illness allowed him. Thus he would have enriched our reflection with his experience, including 18 years of service at the Council of the Bishops’ Conferences of Europe (CCEE).

Generously, Archbishop Giordano prepared a 12-minute video message in French; and he read it to us with affection and calmness. We then broadcast it on a deferred basis, and his inspired words were deeply appreciated. He showed the symptoms of Covid, but in a light way, and we were under the illusion that he was on the mend.

Mgr. Giordano entitled his speech “Future of Europe, the responsibility of the Church and of Christianity”. He was a great scholar of Friedrich Nietzsche. The first of his two points of reflection started from a scene from The Gay Science (n. 125). It tells of a mad man with a lantern lit in the clear morning light. Commenting on the passage, Archbishop Giordano reflected on the European man who “today begins to feel the need to have to relight a lantern just when everything around seems clear”.

At the second point of his articulated speech, Archbishop Giordano, observing the continent also with a look from Venezuela, invited us to have the right horizon to face our problems, including that of defense Europe.

We do not offer here a detailed summary of his precious speech, we send you to hear or read his message: a “spiritual testament”, for us at JESC and Passion for Europe.