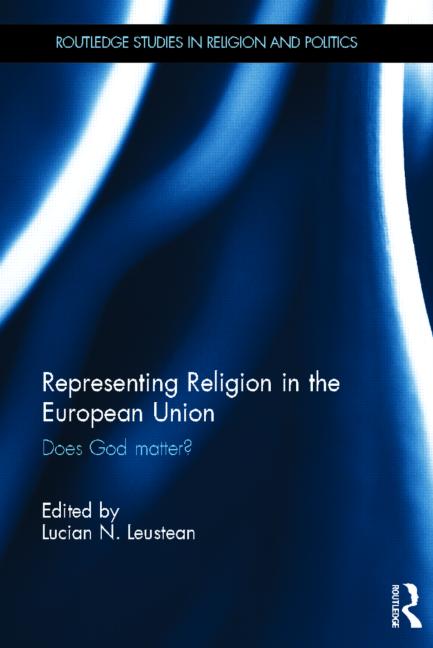 Representing Religion in the European Union: Does God Matter? (Routledge Studies in Religion and Politics), Editor: Lucian N. Leustean
The chapter by JESC member Frank Turneris ‘The Roman Catholic Church and the European Institutions: dialogue and advocacy at the European Union’ (pages 77-90)

In her Foreword, Professor Grace Davie writes: ‘The assumptions of the mid post-war decades regarding the place of religion in both public and private life have, very largely, been reversed. Commentators from the 1960s and 1970s very often defined secularisation in terms of religion losing its public significance. . . . Such a position is, however, very much harder to sustain in the early years of the twenty-first century, as religion and religious issues are seldom out of the news, Conversely, the idea that religion would endure for longer in the private lives of Europeans . . . is only partially correct – the everyday lives o many, if not most, Europeans are very secular indeed, which s one reason why somany of them are disconcerted by the presence of religion in public debate. Such prominence was not anticipated. …

Discovering what happens on a daily basis amongst religious representatives in different parts of the word is not only a fascinating undertaking in its own right; it also belies many commonly held assumptions. Readers of this book will emerge not only better informed, but better able to participate fruitfully in public discussion.’