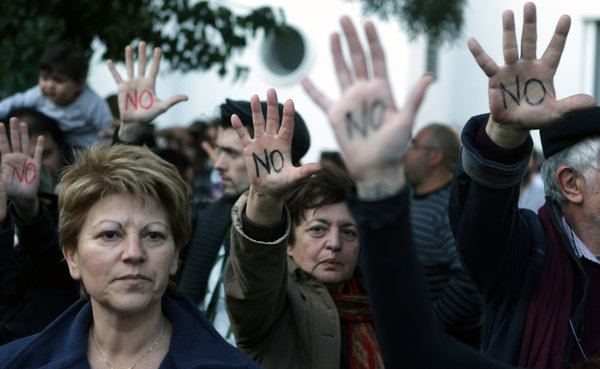 The Cyprus bail-out process was dramatic: according to some accounts even chaotic, because of the conflicting priorities of the contributing parties – the European Commission and European Central Bank, the International Monetary Fund and the European finance ministers of the ‘Eurogroup’.

A first plan for a graduated scheme of enforced losses (‘haircuts’) for all bank account-holders in Cyprus was accepted by the President of Cyprus on behalf of his government. Only then could it be agreed by the ‘Eurogroup’ – after which it was rejected by the Cyprus Parliament without a single vote in favour: a humiliation for the President, course but also an embarrassment for the rescuers

The second plan spared small customers while penalising accounts of over €100,000, notably those of Russian investors, who attracted little sympathy given Cyprus’s reputation as an offshore tax haven: the country has 320,000 registered companies, including shell companies, in a population of 860,000. It is natural why, if Plan B was obviously more equitable, Plan A was ever endorsed by the Eurogroup. If some credit must go to the Cypriot Parliament for forcing a change of mind, it ma be noted that they had failed to restrain the irresponsibilities of activities of Cyprus banks. And yet, these banks, because of exposure to Greek banking crisis, suffered their own haircut. Nothing is simple in these matters.

For example, even if we agree that Plan A was defective, or unjust, in forcing on ordinary savers in Cyprus a levy of 6.75%, nevertheless the measure was far less harsh than that imposed on the customers of Iceland’s banks in 2008. Banks closed to prevent withdrawals while the currency was devalued. In January 2008 the króna stood at 90 to the Euro, in December 2008 about 290 – a ‘levy’ of approximately 65%! There are many ways of losing money to banks, and in the case of Iceland, no Eurogroup stepped in to mitigate the damage.

Cyprus’s burden is nevertheless crippling, even though the sums involved are dwarfed by bank rescues elsewhere. (The UK’s National Audit Office estimated that the UK spent £850 billion on the bank crisis in 2009 – some of which would be recovered) As we have learned since 2008, banks get special treatment: even if too big to fail, they tend successfully to resist effective regulation. The banks of Cyprus, however, were not too big to fail.