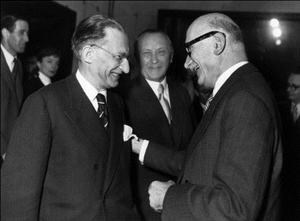 Back in 1957, what shape was united Europe going to take? What was the mindset of the leaders of Europe at that time ?

We will soon commemorate the 60th anniversary of the Rome Treaties and current EU leaders will praise those men who made it possible. Pressed by growing Euro-scepticism, they may be tempted to idealise the clear and precise political vision that brought lasting peace to Europe through the Economic Community and Euratom. The reality is, however, that those treaties were not the original plan, but only an attempt to bring some oxygen to a dying community. In fact, the Rome Treaties were the outcome of flexibility, perseverance, and a friendship that blossomed in the search of the common good.

It all began seven years earlier, when the French foreign minister Robert Schuman proposed a fresh new start to the leader of Western Germany, Konrad Adenauer. After World War II – and the many previous Franco-German wars, Schuman envisioned a new relation based on forgiveness, respect and fraternity, rather than retaliation and power. As soon as they met, these two Christian men knew that they could trust each other, and felt that Providence entrusted them with the mission of bringing about this peaceful revolution.

The specific plan came from Jean Monnet, who thought that the joint management of the coal and steel (which were feeding the war industry) would make war impossible between the partners. It was meant to be the first of a series of communities that would forever bind the peoples of Europe.

What shape should that united Europe take? They didn’t know. And they didn’t care so much. What was important was to walk the way together. What was important was to change the hearts of Europeans, so that they would build a real community. In Schuman’s words, “the community proposes the same objective to each partner, which the philosophy of St. Thomas calls ‘the common good’. This exists far from any egoistical motives. The good of each is the good of all and vice versa.”*

When Alcide De Gasperi (Italy) and Paul-Henri Spaak in (Belgium) heard about this plan, they didn’t want to be left behind in the adventure. Despite belonging to different political families (Spaak being a Socialist, Adenauer, Schuman and De Gasperi Christian-Democrats), they believed that they had the moral duty to change the course of history. They put Europe above all national or partisan interests.

The human being at the centre

They had all lived through two world wars and were above 60 years of age. They were ready to sacrifice their own political careers and reputations to leave a legacy for future generations. Inspired by personalist philosophers such as Jacques Maritain and Emmanuel Mounier, they wanted to build a new society based on human dignity, respect for freedom and democracy, as well as a humane economic system with the person at the very core.

The Holocaust had made them very realistic about the fragility of good intentions. Societies fall too easily into hate and selfishness. This is why a system of negotiation should be institutionalized, making countries and persons so dependent of each other that war would become simply impossible.

The fiasco of a European Army

These men, however, tried to go too far too fast, and only two years after the European Coal and Steel Community (ECSC) was in place, they agreed on a European Defence Community (EDC). They imagined a common army, with a single command. In order to appoint the chief commander, they intended to establish a European Political Community (EPC). They drafted the treaties, and signed the first one. The history of Europe would have been very different had the French assembly not voted against ratification of the EDC. But it was rejected, and there was no plan B, so the founding fathers were devastated. They feared that the ECSC would stagnate and Europe would eventually go back to its old nationalistic ways. De Gasperi died shortly after the European Army fiasco, Schuman was replaced in the French foreign ministry and Adenauer thought that the European dream was over and he should turn to the United States.

The idea of a Common Market

And then the Dutch liberal Johan Willem Beyen came up with the idea of a common market, inspired by the strong cooperation of the Benelux countries. In the meantime, Monnet was working on another plan to revive the “community spirit”: an institution to jointly manage the peaceful use of atomic energy. The six partners discussed both projects. France did not like the common market, and Monnet was persuaded that it was premature to propose a common market. Germany, on the other hand, did not want anything to do with atomic energy and initially rejected Monnet’s plan.

Finally, the six found a compromise and they approved both projects in two different treaties. On 25th of March 1957, the signatories knew they were making history. The streets of Rome were filled with joy and hope, with posters around the city recalling the reason: “Six peoples, one family, for the good of all”. There should be no winner or loser, no division between rich and poor, north and south, only the dream of expanding the family by always renewing the “community spirit”. It would be the task of future Europeans to decide how to continue the quest for an ever-closer union.

Author of ‘Europe, a Leap into the Unknown- A Journey Back in Time to Meet the Founders of the European Union’, Peter Lang (2016)