Immigration is a perennial and complex human reality. It originates and results in personal as well as socio-political phenomena that range from curse to blessing and always contain a high degree of contention. Particularly polarising is the question of low-skilled migrants and their impact on a destination country. Looking at its various economic and political aspects as well as at the scholarly evidence from Europe and the U.S.2 I contend that any welcome of low-skilled immigrants requires a carefully nuanced, balanced and fair policy approach to both immigrant and native populations. This includes legal, illegal and refugee immigrants as well as the broader public, interest groups and policymakers who discern and often calculate the costs and benefits of a particular immigration policy from a number of viewpoints.

First, with regards to the aspect of labour market and income distribution, researchers provide differing evidence. On the one side, they claim that an influx of less skilled immigrants decreases wages and employment rates of unskilled native workers due to substitution effects. Monras (2015) shows a short-term reduction in wages of American workers because of low-skill immigration and a long-term effect negative effect on low-skilled natives entering the labour force in high-immigration periods.3 Borjas claims that in the U.S. low-skilled immigrants affect the economic prospects of the Americans they compete with, hurting poorer natives, especially African-Americans.4 On the other side, scholars claim that the unskilled immigrants may benefit the natives with different skills because of their complementarity. For Peri and colleagues (2008, 2009), immigrant and native unskilled workers are not substitutes: they often specialise in different tasks and allow native unskilled population to move up the occupational ladder.5 This may be due to local economies adjusting to immigration by technology adaptation, workers outflow and varying production patterns.6 Finally, labour markets across the E.U. and the U.S are not the same. European markets tend to be significantly more rigid than the American labour markets, which may lead immigration to create more uneven effects as well as lack of inclusion and therefore immigrants’ integration.

Second, with regards to the welfare state, unless the less-skilled immigrants are well-off, they may burden public finances, thus hurting the native tax payer (higher taxes) as well as the benefits receiver (quality decrease). Data also show younger immigrants may contribute to the welfare state at least in the long-term. Furthermore, with regards to prices, supplied services may become cheaper due to an increase of immigrants, while the cost of goods might increase due to higher demand.7 Finally, the long-term economic gains of immigration tend to be positive: the GDP of a receiving country increases while its labour productivity and salaries tend not to decrease.8 For example, a study on (any) immigration to Switzerland shows an increase in wages even of highly educated natives (Beerli et al 2021).9

Since the question of immigration is a highly political one, not everything can, nor should, be explained by economics. First, looking at the immigration policy “demand” side, data show that pro-immigration individuals and interest groups score political points in case of increased immigration.

The anti-immigrant individuals and interest groups, on the other side, are less likely to be satisfied, yet they still benefit from immigration as their political base further solidifies (against the immigrants). Similarly, on the “supply” side of immigration policy, policymakers may benefit too: politicians tend to take into account not only public opinion when formulating migration policy but also strong interest groups and their constituencies.10 For example, the March 2021 Dutch general election gave significant rise to political parties of both pro- and anti-immigration political camps.11  Second, individual attitudes toward immigration matter.12  As Europe and the U.S. tend to have low positive attitudes towards immigration,13 the more public opinion is restrictive the more a country’s migration policy is restrictive,14 even if official policies may not always fully follow this pattern.15 For example, governments may still allow for large numbers of legal and illegal immigrants despite public opposition (consider Germany’s refugee welcome in 2015).

Third, education matters in immigration policies and public opinion. As regards low-skilled immigrants, for instance, well-educated native respondents may be more pro-migration oriented than less-educated ones.16 Finally and perhaps most importantly, low-skilled immigrants have an impact on natives’ votes as electors tend to vote based on the perception toward immigrants as either a cost or a benefit. In Europe and the U.S., immigrant inflows affect the success of right-wing parties in particular.17 Their share increases with the increase of low-skilled migrants.18 Further nuancing this argument, Danish elections have proven that in all but the most urban municipalities, allocation of larger refugee shares between electoral cycles leads to an increase in the vote share for right-leaning parties with an anti-immigration agenda; yet, in the largest and urban municipalities, voters’ responses to refugee allocation is welcoming.19

Any share of low-skilled immigrants comes with its opportunities, costs and, most importantly, questions on how to reconcile economic optimism and political polarisation. One the one side, a receiving country’s elites and general public need to prudently discern if and how the contested economic benefits of immigration outweigh their perceived political cost.

Immigration, especially the illegal one, is a divisive issue and any perception of inequality related to it may increase polarisation.

On the other side, immigrants of different categories need to play an active socio-economic role. As found by Fasani et al (2020), European employment bans do not benefit neither asylum seekers nor the economic wellbeing of the country; this finding may call for asylum seekers’ early integration.20  Similarly, Frattini and Dustmann (2013) find that migrants coming to Europe are severely disadvantaged even if compared to natives with the same measurable skills.21

Any immigration policy necessitates a fair inclusion of concomitant policies of redistribution, education and integration for all in order to attenuate possible negative effects of immigration as well as the political gambling of pro-and anti-immigrant groups. An immigration policy requires as much clarity and include as many people as possible, without hypocrisy.22  Finally, while lawfulness is key, the overly tight migration approaches in Europe and the U.S. need additional legal channels. Otherwise, asylum-granting and other immigration systems will remain overcharged due to an overwhelming number of asylum claims by immigrants who might only and justifiably desire a better life. In short, the welcome of immigrants might prove best if combined with balance and clarity, provided there is nuance, inclusion and fairness granted to all. 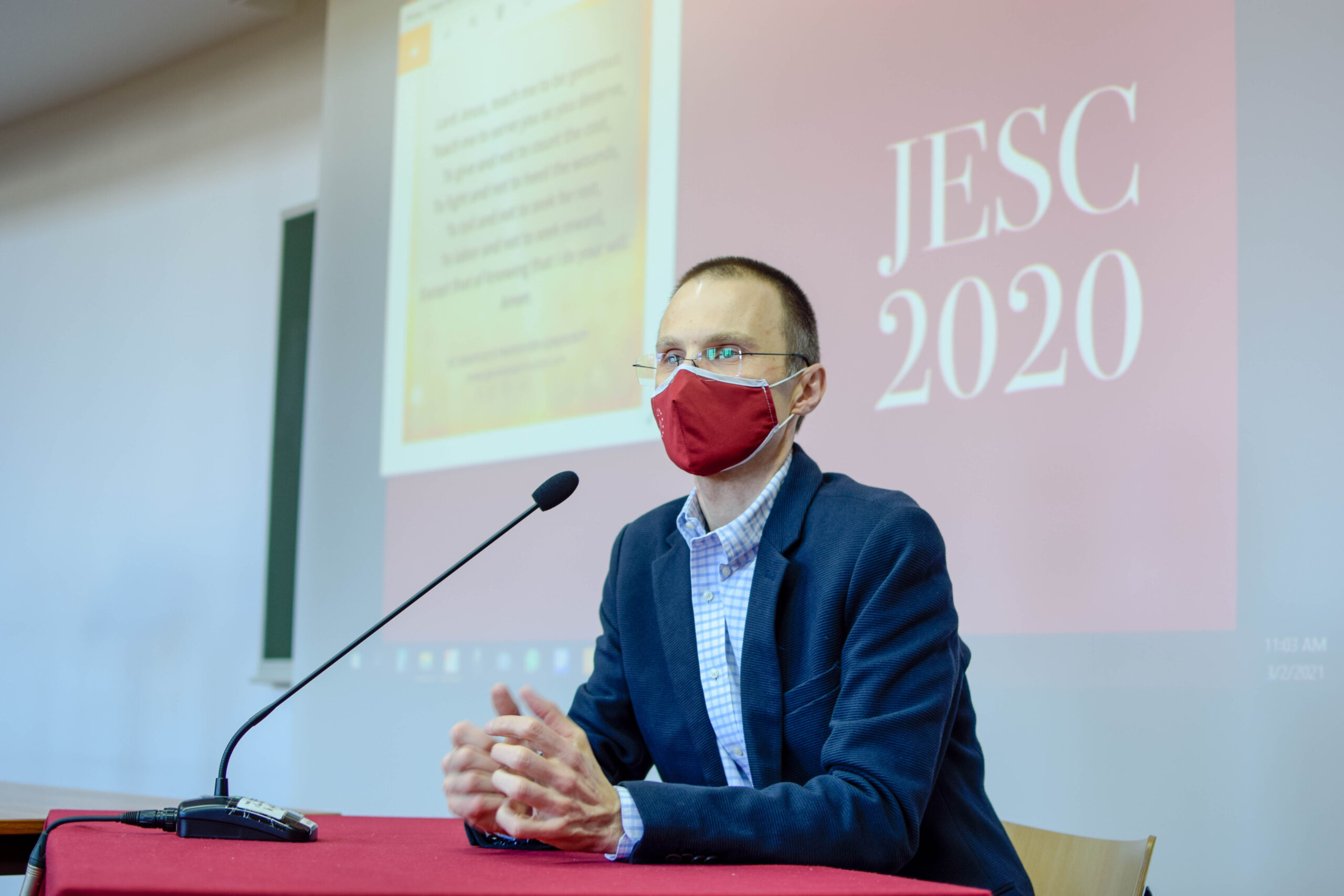 For my Jesuit and other Friends working
with and for Refugees around the World.

I would like to thank Professor Anna Maria Mayda at Georgetown University for helpful comments on an earlier version of the text and the colleagues of the IBP 5 community.

For the sake of comparison, let us put Biden’s statement next to those of other U.S. and European leaders:

2 Europe and the U.S. represent a destination to which the great proportion of international movement of non-native people is directed for economic and political reasons. In relative terms, countries such as Luxembourg, Switzerland, Germany, the U.K., France and Spain rank among the destinations receiving most immigrants globally. Even if some European countries have low percentages of migrants, such as Hungary, Slovakia and Romania, some of which even experience significant emigration flows, most of the continent witnesses a significant net inflow of immigrants.

13  In the case of Europe, very low support toward immigrations has been measured mostly but not only in countries such as Latvia, Slovenia, Slovakia, Hungary or even, though less, in Portugal, Germany and beyond. See also Facchini et al (2008) “From Individual Attitudes Towards Migrants to Migration Policy Outcomes: Theory and Evidence [with Discussion]” Economic Policy, 23(56): 651-713. Moreover, these researchers found that across countries of different income levels, only a small minority of voters favour more open policies toward immigration.

14  Cf. The 1995 ISSP National Identity Module and United Nations, including the following graph: 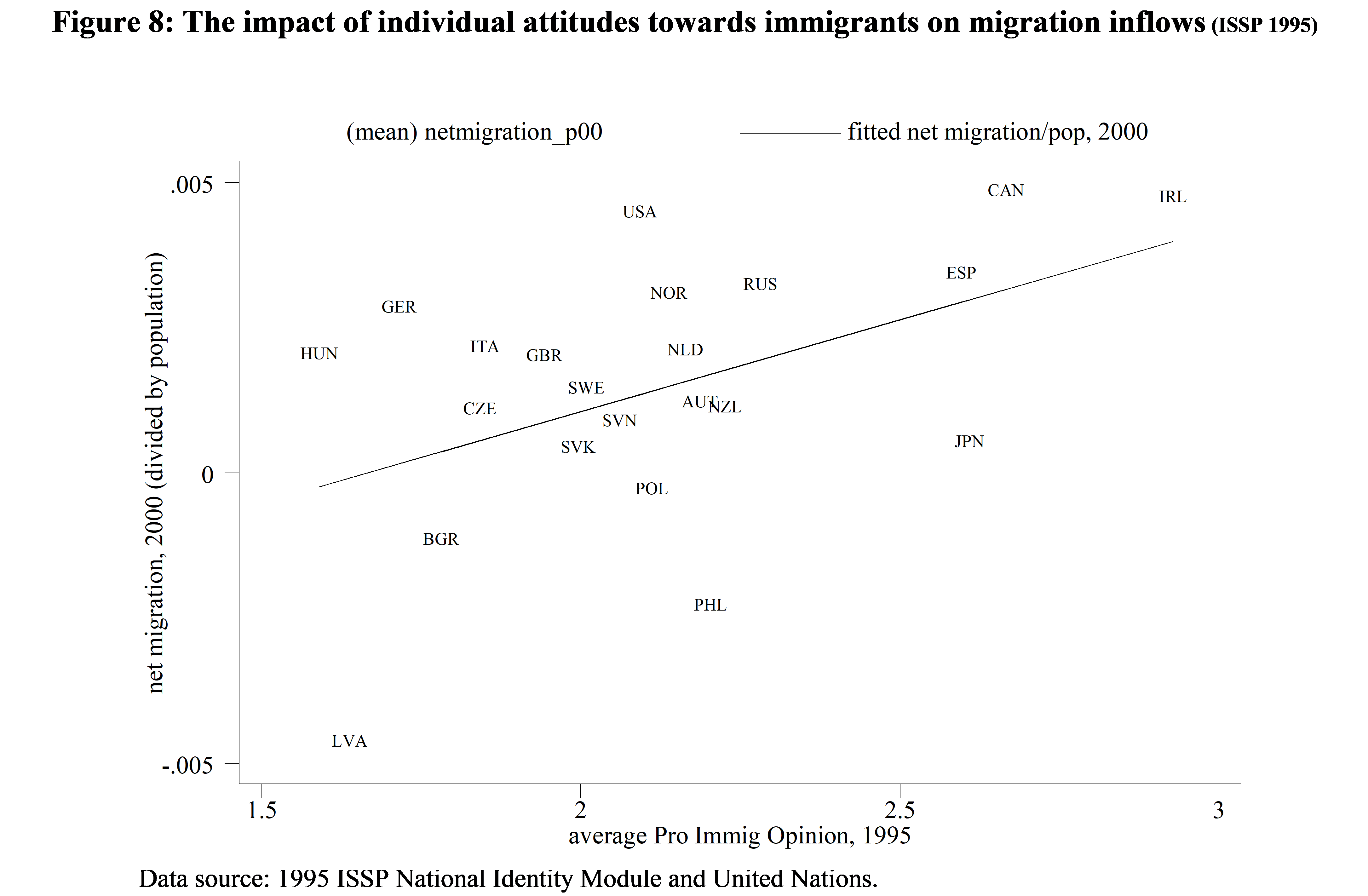 15  In fact, Facchini et al (2008, see above) find that “given the extent of opposition to immigration that appears in public opinion, it is somewhat surprising in a median voter framework that immigration takes place at all.”

22 For example, consider that not only Republican but also “recent Democratic presidents have taken strong stands on enforcement, including deporting illegal immigrants, bulking up border control and building fencing on the southern border.” Quotation from “Biden’s border crisis: The president faces a decisive test of his leadership” The Economist (20 Mar 2021): 8.