After a warm and poetic introduction, Martinelli gave floor first to Andrea Tilche, the Acting Director of the Directorate Environment of the European Commission. Tilche emphasised from the outset that “We have to go to zero. We have to stop emissions very soon.” He called out that a “systemic change needs to happen because the time is running short.” Critical of the Christian contribution, Tilche remarked that “Maybe the Church has not taken up the mobilisation, the understanding, and the immense significance of Pope’s Encyclical Laudato Si’.”

Philippe Lamberts, a Member of the European Parliament, drew strongly upon the Pope Francis’ encyclical Laudato Si’ . Lamberts stressed that “the topic of Laudato Si’ is the on of the human dignity.” But, then continued: “When the Pope spoke at the European Parliament he got a standing ovation. Did we perceive any changes afterwards? Absolutely not.”

Martin Maier SJ, the secretary of European affairs at JESC, said as a third panelist that “The impact of this Encyclical astonishing. Laudato si’ is a very fruitful document. The Pope wanted to launch a dialogue. It is a joyful and dramatic document.” Maier bemoaned the fact that often “the reception of Laudato Si’ had a stronger reception outside the Church than in the inside of the Church. The reception of this document needs time. But the time is running out. Action means systemic change.” 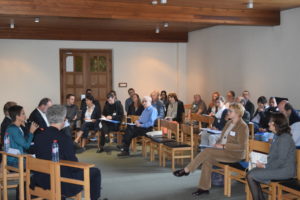 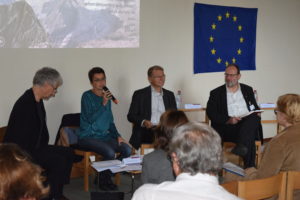